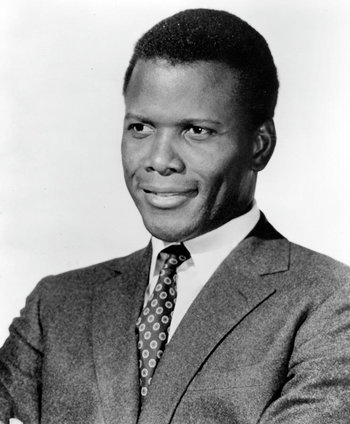 Sidney Poitier KBE (February 20, 1927 – January 6, 2022) was a Bahamian-American actor and director, who might be regarded as the Jackie Robinson of dramatic film acting in North America. Before him, the notion of a Black man taking serious leading roles in mainstream American films was all but scoffed at, but this magnificent actor broke through the prejudice to make an invaluable precedent for minority actors and paid the price for it along the way.

Poitier made his screen debut as an uncredited extra in the 1947 race film Sepia Cinderella, and landed his first Hollywood role three years later in Joseph L. Mankiewicz's No Way Out. After hitting the big time as a bright-but-troubled high school delinquent in the 1955 Save Our Students drama Blackboard Jungle, Poitier soon became a special presence in classic films like The Defiant Ones and A Raisin in the Sun. He was the first Black man to be nominated for an Academy Award for Best Actor (for The Defiant Ones) and later the first one to win (for 1963's Lilies of the Field). Unfortunately, Poitier was all too aware that this was effectively an award for being the Token Minority in Hollywood, and he felt the pressure to set an example by playing characters that showed African Americans in a positive light to bury the old Stepin Fetchit stereotypes.

Although Poitier was harried at the height of his career with endless questions about racial issues and The Civil Rights Movement, he had another achievement of becoming the #1 box office movie star in 1967 with the hit films, To Sir, with Love, In the Heat of the Night (which won the Academy Award for Best Picture), and Guess Who's Coming to Dinner.

Afterward, as tastes changed, his acting career declined, but he was able to be a successful director (Stir Crazy) and later Ambassador to The Bahamas as minority talents reaped the rewards of Poitier's trailblazing. In addition to his Academy honors, he was nominated for seven Golden Globe Awards (winning for Lillies of the Field), six BAFTAs (winning for The Defiant Ones), two Grammy Awards for Best Spoken Word Album (winning for his 2008 book Life Beyond Measure: Letters to My Great-Granddaughter), and two Primetime Emmy Awards during his career. Little known fact: he was also knighted, so he did become a Sir!