I Read It for the Articles 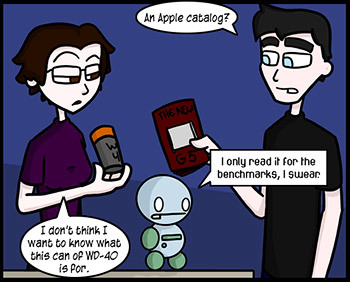 "I Read It for the articles!" is the Stock Phrase people use to avoid catching any flak over liking a media product which has parts to it that are not popular or socially acceptable - instead, the individual can cite the more respectable elements of the product and claim they have no interest in, say, the full-frontal nudity or the brutal violence.

The trope name comes from a common justification for reading Playboy magazine - it quickly became a joke that a man caught reading Playboy would insist he was only reading it for the articles.

The reason that particular joke became ubiquitous is that, at least in The '60s and The '70s, the excuse had a kernel of truth to it. Playboy paid writers nearly three times as much as other publications, meaning that it drew considerable talent, such as Jack Kerouac, Stephen King and Arthur C. Clarke, and interviewed interesting people like Martin Luther King Jr., Fidel Castro, Hunter S. Thompson, and John Lennon, who gave the last major interview of his life to Playboy just four months before his murder. It used to feature a variety of short stories, snippets, and interviews that wouldn't be out of place in The New Yorker... just surrounded by pictures of naked women. In fact, Playboy is one of the top selling Braille magazines, even though it completely lacks its usual selling point.

Changing social morals have rendered this something of an outdated trope, as audiences have shown they have no problem with explicit sexual content in TV and film. To whit: someone who watches a critically acclaimed or sexually explicit show like Girls or Masters of Sex has seen more than 70's magazine readers ever saw in Playboy. And with a staggering amount of pornography always just a few keystrokes away on the Internet, the idea of being scandalized by a few naked pictures is almost quaint. The modern-day version of this would probably be defending a work known for its gratuitous levels of violence, like someone who insists they play Grand Theft Auto for the plot.

Just to be clear, this is in-universe examples only. Works that you or the fandom consider Guilty Pleasures are not examples of this trope.

Compare ...Or So I Heard and Just Here for Godzilla. Contrast with Unconventional Learning Experience. Also see Come for the X, Stay for the Y.