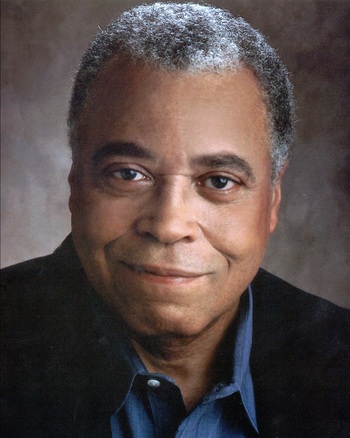 U.S. Army Ranger. Played blue-eyed Thulsa Doom. He is God, Darth Vader, Mufasa, Kibosh, General James Solomon, and (in a single "Treehouse of Horror" episode of The Simpsons) Maggie Simpson. Also did commercials for Verizon (and its predecessor Bell Atlantic) for a while. Living proof that sometimes, all you really need to be a badass is the perfect voice.

A noted American actor of stage and screen who was born in Arkabutla, Mississippi, James Earl Jones (born January 17, 1931) is famous for his sonorous bass voice that can either be sinister (e.g. Darth Vader and Kibosh) or paternal (Mufasa), but is regardless authoritative and commanding — even more so when you consider he had to overcome a severe stutter in his youth. His voice is also remarkable for being naturally of bass register, which is indeed very rare. He gets a fair amount more respect on the stage, where he played a number of Shakespearean roles (including being one of the first African American actors to play the lead in Othello) and was a fixture on the African-American art-theater circuit (he was the lead at the opening performance in several of August Wilson's Pittsburgh Cycle, most famously Fences.)

Here is a clear demonstration of just how perfect his voice is for the role (or rather, a demonstration of how lame things would have been without him): A pre-voiceover clip showing Darth Vader voiced by his on-screen character's actor

, David Prowse, who had the right stature for the character. Jones himself was cast later, after George Lucas et al realized Prowse's own voice, uh, wouldn't work.

He Also Did some funny Sprint commercials

with Malcolm McDowell. Notable for making the first full-fledged celebrity cameo on Sesame Street, reciting the alphabet on the show's second episode in 1969.note Carol Burnett made an extremely short appearance in the first episode

The Empire Strikes Back

The Empire Strikes Back