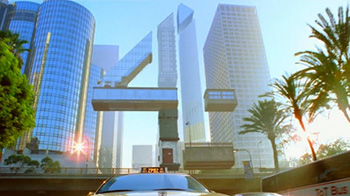 Channel 4: (Former) home of the depth illusion logo.
"No sports, no rock, no information
For mindless chatter, we're your station!
KBBL talk radio."
— The Simpsons
Advertisement:

In broadcasting, it is common for stations or networks to give some kind of announcement as to what station or network you are watching/listening on. This typically happens just before a feature begins. Many network mascots and logos are born in idents. They also may contain a theme tune, carry a common motif, or carry no common element at all. Sometimes, specific idents may be created for specific events (such as holidays or specific programs). Early idents, which were basic and fairly static, can accidentally be Nightmare Fuel to younger viewers. Shorter versions, which tend to appear in the space between programmes and adverts, are known as Stings, or Break Bumpers.

American broadcast stations are required, under federal law, to declare their call sign and city of license at least once an hour, as close to the top of the hour as is reasonably possible. Obviously radio stations have to announce; a TV station may give it in audio, visual or both. Note this only applies to broadcast stations; a station that is on the Internet or is a cable-only or satellite-based station (Music Choice, Sirius/XM, CNN, USA, HBO, MTV, etc,) do not have call signs and are not required to identify themselves. That said, many do so anyways, in part to mimic the older broadcast format, in part because, well, it's not exactly a bad thing to remind people of what, exactly, they're listening to or watching.

Idents are still quite popular in European television. The BBC has a fairly consistent design of idents across its TV channels, as does ITV and Channel 4. British idents often have a continuity announcer, a disembodied voice note or, in the case of The BBC in the 1950s and most ITV regions up until about 1980, an on-screen announcer that informs you of the next program or two and whether you might want to put the kids to bed for this one. British idents aim to entertain or mystify rather than simply inform, and sometimes their onscreen display may be relevant to the content of the show to follow.

By contrast, many commercial broadcasters outside of Europe do not typically use such elaborate continuity. For example, although U.S. networks tend to have a package of presentation elements for commercials and features such as pop-up "snipes", on-screen bugs for persistent identification have been commonplace since the 1990's, and longer idents would slow the transition between programs, and in turn, cut into valuable commercial time. The standard practice is to air commercials for upcoming programs over the credits of the previous show, with any form of verbal announcement usually done over the Vanity Plate with a generic musical backing. The aforementioned legal identification is usually just fine print on a short bumper or promo for a station's syndicated or news programming ("Can TV Tropes ruin your life? Our exclusive investigation, tonight at 11."), and overlaid on-screen through automation. If a channel does have themed idents, they are typically short bumpers with just a jingle, and sometimes a slogan/identification. Longer and more elaborate idents were used more often during the early era of television, especially to promote programs being broadcast in the then-new color format, and there are still notable examples of idents still used today (such as HBO's famous Feature Presentation intro and fanfare).

Advertisement:
Many examples can be found at the idents.tv

blog, which covers this kind of stuff with a vengeance. Audio clips of U.S. and Canadian radio station identifications can be heard at Top of the Hour.

has videos of some of the British ones mentioned here.

Fictional Examples Within Other Media: