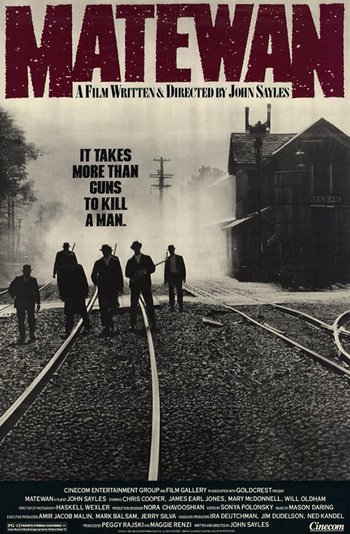 Joe Kenehan: Shooting is what they want now.
Sephus Purcell: And maybe it's what we want, too.
Advertisement:

Matewan is a 1987 historical drama film written and directed by John Sayles. It stars Chris Cooper with a supporting cast including James Earl Jones, Mary McDonnell, David Strathairn, Bob Gunton, and Will Oldham, among others.

The year is 1921, and trouble is brewing in the town of Matewan, West Virginia: the workers have organized a labor union and walked out of the mine. Enter Joe Kenehan (Cooper), a former Wobbly (member of the Industrial Workers of the World) and current union organizer for the United Mine Workers of West Virginia is riding a train when a group of miners attacks the black scabs on board. Baldwin-Felts Detective Agency men are called in to battle the union workers, and the stage is set for a bloodbath.

The film notably and accurately covers the struggles of the United Mine Workers of America in West Virginia in the early 1920s, where tensions were at their highest. With use of some real-life figures, its the only modern cinematic depiction of the historic Battle of Matewan.