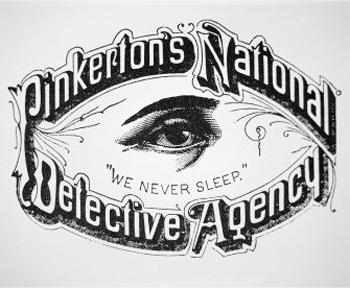 And neither will you by the time we're done, union-man...
"We Never Sleep."
— Motto of the Pinkertons
Advertisement:

An agent of the Pinkerton National Detective Agency, "Pinkertons" for short, "Pinks" to their enemies.

Founded in the 1850s by Allan Pinkerton, the Pinkertons were often hired by corporations such as the railroad companies to investigate crimes against them and the activities of labor movements. Made famous by their protection of Abraham Lincoln from an assassination attempt prior to his taking the oath of office. In the 1870s, they added government work to their portfolio, as the Department of Justice did not have the infrastructure to do massive investigations on its own. (This work dried up in 1893 with the passage of the "Anti-Pinkerton Act", which prevented the US government from directly hiring Pinkerton agents.)

In addition to their notorious and much-reviled strikebreaking work, the Pinkertons were also active in chasing down outlaws who had pulled train jobs or major bank robberies. And if you were wealthy enough, you could hire them for regular detective work as well. The Pinks were well known for brutality and ruthlessness in their methods; in fiction, even when they are pursuing more laudable goals, this tends to give an unfavorable color to their portrayal.

It's believed the phrase "private eye" comes from the Pinkerton Agency's symbol, an open eye (which rather hilariously came to look like the CBS eye in later years). Dashiell Hammett was a former Pinkerton agent, and used his experience to inform his stories.

After the 1930s, the Pinkerton Agency largely concerned itself with security services. They were bought and merged with a Swedish security company called Securitas AB, and they are now known as Securitas Security Services USA, Inc. Poetically, Securitas is now the subject of unionization attempts. But that still hasn't stopped companies like Amazon from using Pinkerton operatives to spy on workers and labor unions

Compare and contrast with Private Intelligence Agency, which is what the company does nowadays after Securitas purchased the company and its assets. Hilariously unrelated to Real Men Wear Pink.

No relation to the Weezer album Pinkerton, though the agency did file a Frivolous Lawsuit against the band, accusing them of trademark infringement. (The case was thrown out immediately.)

Examples of Pinkerton detectives in fiction: