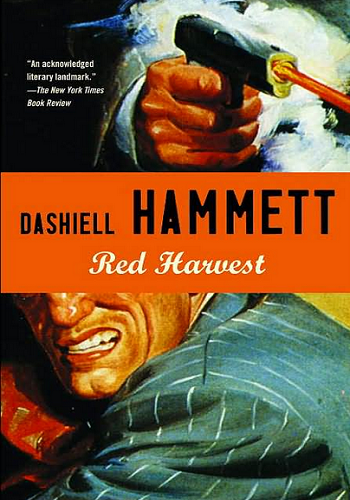 This damned burg’s getting me. If I don’t get away soon I’ll be going blood-simple like the natives.
—The Continental Op
Advertisement:

Red Harvest is a seminal novel by Dashiell Hammett, first published in 1929. It is narrated by The Continental Op, a recurring character in Hammett's world. When called to the mining town of Personville (or as the residents more accurately call it, "Poisonville"), the Op discovers that the city is being run down by criminal gangs. The detective is hired to clean up the place, and mayhem ensues.

The novel has had a great deal of influence on later fiction, ranging from noir to samurai films. Red Harvest is thought to have been an influence on Akira Kurosawa's film Yojimbo, and combined with The Glass Key is a heavy influence on the Coen Brothers' noir film Miller's Crossing. Red Harvest also coined the term "blood simple" (after which the Coen Brothers' film debut is named); the phrase refers to the addled, fearful mindset people are in after a prolonged immersion in violent situations. An official film adaptation starring Jack Nicholson and directed by Bernardo Bertolucci was planned in The '80s but lost favour in the wake of the Box Office Bomb of Heaven's Gate.

Red Harvest is not related to Star Wars: Red Harvest or Blue Harvest: Horror Beyond Imagination.