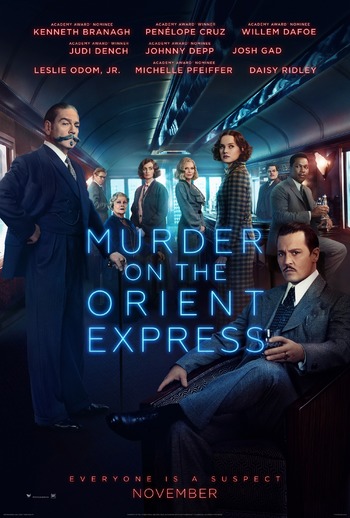 Clues are everywhere.
"You know, there is something about a tangle of strangers pressed together for days with nothing in common but the need to go from one place to another, and never see each other again."
— Monsieur Bouc
Advertisement:

Poirot is traveling from Istanbul to London via the Orient Express. During his journey, an American passenger is murdered and at the insistence of Poirot's old friend Bouc, a director of the Wagon-Lits Company, he resolves to find out which of the other passengers in the Calais Coach committed the crime.

Just like the 1974 film, it boasts an international All-Star Cast:

A follow-up, Death on the Nile, also directed by and starring Branagh, was released after several delays on February 11, 2022. A second sequel, A Haunting in Venice, is in production.

This story has a very spoilerrific ending, so read the trope list below at your own risk.

Murder on the Orient Express contains examples of: