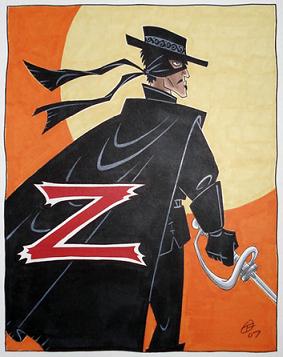 "From the Z to the O to the double R O, He's the dude in a mask from the barrio."
"Out of the night, when the full moon is bright, comes the horseman known as Zorro..."
Advertisement:

Zorro is a mysterious masked and black-clad swashbuckling rider who fights injustice in Spanish California in the early 19th century.

The sleepy pueblo of Reina de Los Angeles could be Paradise. The weather is sunny, the señoritas are pretty, the caballeros are handsome, and the land is rich with promise. But alas! The new governor is a tyrant who oppresses the natives, overtaxes the peasants, and seeks to rob the proud, upstart hidalgos of their lands and wealth to give to himself and his cronies. He has the army firmly under his control, and has placed corrupt officers to enforce his will upon the people.

But there is one man who the governor cannot stop, one man who rises up to fight for justice, who inspires the people to resist and take control of their own destinies. That man is Señor Zorro, The Fox, whose cunning is legend, whose swordsmanship is unsurpassed, whose black-clad, masked form slips in and out of the night like a ghost. You may know him by the ragged letter "Z" he carves into the cheeks or clothes of wicked men who have lost duels to him, and leaves at the scene of his adventures. He discomforts the powerful and corrupt, and helps the poor and oppressed. Truly, this Zorro is a hero!

But who is this mysterious Zorro behind his mask? Well, it is certain that it cannot be Don Diego (de la) Vega, even though Don Diego is certainly the right age and of good family. For Don Diego is a useless fop who reads poetry, disdains violence and any form of sweat-inducing activity, and sniffs a perfumed handkerchief when in the presence of his lessers. No, it cannot be he.

Zorro was first created by Johnston McCulley for the novella The Curse of Capistrano serialized in All-Story Weekly Magazine in 1919. The Swashbuckling story was complete in itself, without much room for sequels. Douglas Fairbanks Senior read the novella, loved it, and convinced his studio to buy the rights so he could star in a movie adaptation, The Mark of Zorro (1920). It was a huge success, inspiring McCulley to write a sequel, The Further Adventures of Zorro, and a total of sixty Zorro stories altogether, ending with The Mask of Zorro, printed posthumously in 1959. A more recent literary portrayal was written by Isabel Allende in 2007, with a significant amount of Continuity Nod to previous works.

Think The Scarlet Pimpernel moved to California, and following in the footsteps of Robin Hood as opposed to rescuing aristocrats from the guillotine.

Perhaps the most iconic Proto-Superhero of all, Zorro has inspired many other heroes, such as Batman (including within the story - nearly every retelling since Frank Miller's Batman: Year One has the Wayne family coming home from a Zorro movie on that fateful night) and Roronoa Zoro of One Piece.

Zorro, in his various incarnations, provides examples of:

Alternative Title(s): The Shadow Of Zorro