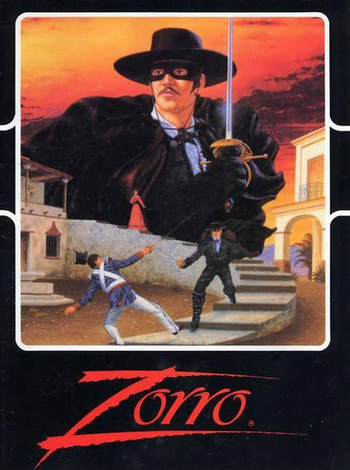 This Zorro DOS game was released in 1995 by Capstone Software.

Don Diego Vega has a secret identity - that of Zorro, a masked swordsman who has sworn to protect the innocents of California, at the time a Spanish colony. Among the powerful and corrupted men there is Don Cortez, who hopes to gain even more power by discovering an ancient treasure. Honoring his word, Zorro sets out to stop the Cortez, alone against nearly impossible odds...

Based on the series of books by Johnston McCulley, Zorro is a side-scrolling platform game that has certain similarities to Prince of Persia and other so-called "cinematic platformers". The emphasis of the gameplay is on careful advancement through the levels and physical activities such as jumping and climbing. Zorro has two weapons at his disposal - a whip and a sword; the sword is more powerful, but the whip has a longer range.

The game utilizes cutscenes with live actors to advance the story.