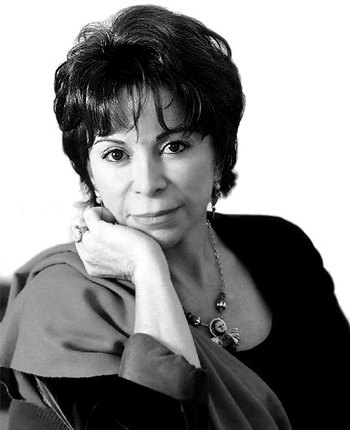 Isabel Allende Llona (born August 2, 1942) is a Chilean writer, living in The United States, with a lot of success worldwide. She is not the daughter of former Chilean President Salvador Allende as some might believe, but rather his niece (Salvador and Isabel's dad are cousins); a mistake easy to make, since Salvador Allende does have a daughter named Isabel Allende Bussi, currently a politician and senator in Chile.

Due to some Hype Backlash and the concept of True Art for some people, she is very much a polarizing author. The press has lauded her many times, but people like critic Harold Bloom or fellow writer Roberto Bolaño have bashed her numerous times, accusing her of churning out commercial literature, reinforcing female stereotypes, plagiarizing Gabriel García Márquez or just plain being a bad writer. In her native country, the vitriol is ten times more accentuated, especially considering how heavily some of her books lean towards What Do You Mean, It's Not Political?.

These considerations moved fellow writer Camilo Marks to write: "There's two ways to read Isabel Allende. The first consists on scrutizing every defect of her books, exposing them in detail and send her to the pits of Hell by an unappealable, self-satisfied, founded guilty verdict. The second is built on the premise that it is legitimate to spend a good time reading her narrations, as they are entertaining, it's not hard to get caught by them and they do have merits that attract the massive crowd or even more demanding readers. Between both extremes is hard to find a middle point."