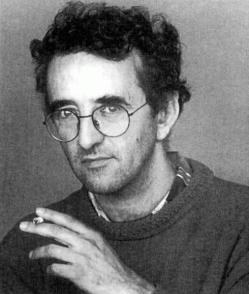 Roberto Bolaño Ávalos (April 28, 1953 – January 15, 2003) was a Chilean novelist, short-story writer, essayist and poet. He originally wrote poetry, but changed to write fiction for money. After all, he had a family to feed. Despite this, he continued to think of himself primarily as a poet. He had a kind of tendency of taking an Ensemble Dark Horse from one book (or sometimes just a minor character) and writing a story around that character.

Even though he was from Chile, he spent very little time in the country and lived in Spain. He was also very critical of the writers in Chile, particularly Isabel Allende, decrying their (perceived) lack of talent. He was also a vocal opponent of the idea that it was possible for art to be apolitical, and this likely fed into his distaste for the Chilean literary establishment, whom he felt to have been deferential to the country's authoritarian government. (Bolaño himself was a committed leftist.) One of the few Latin American authors Bolaño expressed much praise for was Jorge Luis Borges.

Bolaño died in 2003 of liver failure. It had been rumoured that he had suffered from opiate addiction at a younger age, but his widow has refuted this. Despite having been dead for sixteen years, he is still publishing books. That shows you how prolific he was. Many of his published works have yet to be published in English, presumably because bringing them all out at once would run the risk of over-saturating the market with new (in English) Bolaño's works. New works are still being discovered posthumously and published in Spanish, too; The Spirit of Science Fiction had its original Spanish-language publication in 2016.

Do not confuse with Roberto Gómez Bolaños, also known as Chespirito.

Novels and novellas written by Bolaño with their own pages here:

Tropes in the works of Roberto Bolaño: