What Do You Mean, It's Not Political? 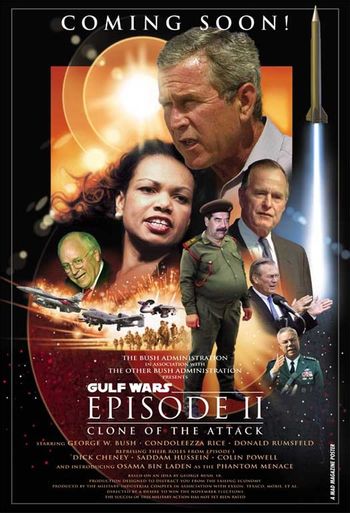 It involves a leader, a Senate and a war in the desert. Clearly a modern allegory.
I've had the theory that the moral depiction of dragons in popular fantasy gives a decent rough indicator of the global financial situation. In a boom, you see, the hoarding of gold is more likely to be considered to be a harmless eccentricity, even something desirable, and dragons are noble and nice. But in a recession, when everyone hates the people with all the money, then dragons are villains. Examples: Smaug is the archetypal asshole dragon, and The Hobbit was written in the Great Depression.
— Ben Croshaw, "Of Dragons and Ruined Cities"

When works are interpreted as being allegories for political issues (most often ones of war) at the time of the writing, with no prompting from the author. Sometimes, this is applied as retcon, with works written decades before the event being interpreted as allegories for it. (This may be a result of Older Than They Think.) Such interpretations may be instances of History Repeats, Hilarious in Hindsight, and Harsher in Hindsight.

Even still many people think that somehow everything has to be inspired by what is most recent and that the author is targeting Small Reference Pools — and furthermore that the writer wrote the work shortly before publication, when in fact it normally takes a year to get from completed manuscript to on the shelves even if the writer had no difficulty selling it, and the work may have taken years to write.

Even the most innocent or neutral subject matter can take on political (or sociopolitical) connotations due to the associations people tend to make in the wider scheme of things. The following are seemingly apolitical topics that may be interpreted as political due to the "culture wars" of recent decades.

Also note that only rarely is this analysis laudatory. Nine times out of ten, the critic is repulsed by the supposed moral/philosophical/social/whatever point a work is making, and uses their argument to condemn the author. This can even result in a sort of premortem Death of the Author if the critic claims that everything in the work arises from subconscious attitudes the author may or may not have (a possible side effect of the ''auteur'' theory). The argument might even be applied to an entire society of a particular time and place, with the implication that because the audience enjoyed something as entertainment, they must have applied its values to their daily lives as well.

Relatedly, many critics hold a belief that every work is political, regardless of what the author intended; for instance, critics may feel that an author has particular moral or social obligations to challenge the "status quo" (or whatever the critic believes is the status quo). A related school of thought holds that, since the author is someone with opinions who exists in a political context, those opinions and context must necessarily shape their work in various ways with varying degrees of subtlety and self-awareness. An attempt to be apolitical is a kind of political statement unto itself (specifically, of supporting the status quo) and that’s if one is lucky. If one is unlucky, this belief will be used to claim that apolitical works are, by definition, not True Art. We used to have a trope for this (“True Art Sticks It to the Man”), but it was sent to the Permanent Red Link Club because it necessarily broke the Rule of Cautious Editing Judgment.

May overlap with Wild Mass Guessing. Compare to Dystopian literature, Writer on Board, Author Tract, and Author Filibuster, for cases where the author makes no secret about the political intent. Contrast with Propaganda Piece. See also Faux Symbolism and What Do You Mean, It's Not Didactic? When characters are asking each other "What do you mean, it's not political?", that's All Issues Are Political Issues.