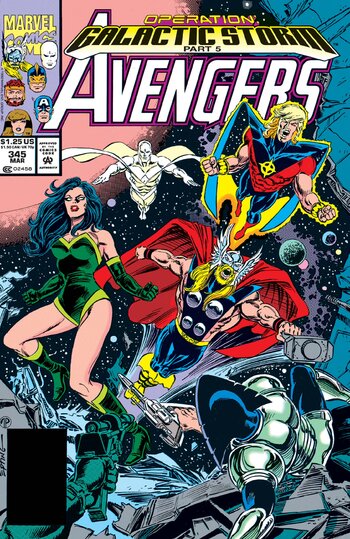 Operation: Galactic Storm is a 1992 Bat Family Crossover of The Avengers. The main idea was drafted by Mark Gruenwald, Bob Harras and Fabian Nicieza, and it took place in the pages of Avengers, Avengers West Coast, Captain America, Iron Man, Thor, Wonder Man and Quasar. It is about the Avengers getting caught in a war between the Kree and the Shi'ar.

Rick Jones had a weird dream, with Captain America on Hala (the Kree homeworld), right after its destruction. He arranges a meeting with him, to tell him about that dream, and how he intends to have no further role in any cosmic conflict. Fat chance. During the conversation, an alien tries to abduct Jones, but it's not a Kree, but a Shi'ar. He's part of the Imperial Guard, a group of Shi'ar superheroes, and there's also Starforce, a group of Kree superheroes. Both of them try to secure Kree artifacts left on Earth, and the Avengers try to contain the situation. Meanwhile Quasar has bad news: the Kree and the Shi'Ar are using a worm hole located very near our sun, which is disrupting its natural activity.

The Avengers divide into three teams: one will stay on Earth, the second will visit the Kree, and the third will visit the Shi'ar. They are all incapable of convincing the alien empires to quit using the portal or stopping the war, and Lilandra even sends the Nega-Bomb (a weapon of mass destruction of intergalactic scale) to the Kree galaxy. She's eventually convinced to retrieve it and begin peace negotiations, but it's too late: the bomb had been stolen by Skrulls (who have an even greater feud with the Kree), who then set it off.

For a number of reasons all the Avengers survive the explosion, which destroys 90% of the Kree empire. But the actual architect of the Kree genocide isn't the Shi'ar or the Skrulls: it's the Supreme Intelligence, the leader of the Kree. The Kree were in an evolutionary dead end, and he did this so that the Kree emerging from the disaster will be stronger.

What to do about it? The Avengers are divided. Captain America, Crystal, Starfox, Clint Barton, Living Lightning, Captain Marvel II (Monica Rambeau), the Scarlet Witch and Quasar think that Thou Shalt Not Kill. Iron Man, Black Knight, Sersi, Hercules, Vision, Wonder Man and Thor (Eric Masterson) think that they must Pay Evil unto Evil, and so they execute the Supreme Intelligence.

Data East produced a very loose Fighting Game adaptation of the crossover called Avengers in Galactic Storm, which featured a mixture of Avengers and Starforce members as playable characters.