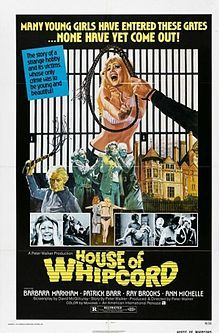 House of Whipcord is a 1970s British cult film. Judging from the poster and synopsis, you'd expect it to be your average Girls Behind Bars exploitation flick. If you tuned in to see that, you were wrong. House of Whipcord is a genuinely disturbing and effective horror film and perhaps one of the more scarily realistic horror abduction stories ever made.
Advertisement:

The story follows a French glamour model Anne Marie (Penny Irving) living in England. She meets a man at a party and hits it off with him. He invites her to come on a weekend trip with him to visit his mother. She falls asleep in the car and when she wakes up, she's outside a huge imposing building that is actually a makeshift prison for girls that a group of people have set up to punish those girls they decide haven't been punished harsh enough for immoral crimes.