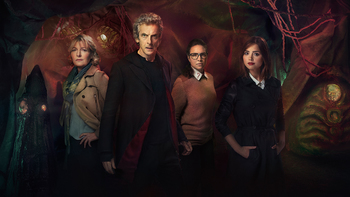 "When you fire that first shot, no matter how right you feel, YOU HAVE NO IDEA WHO'S GOING TO DIE!"
Click here to see the Radio Times magazine poster for this episode: 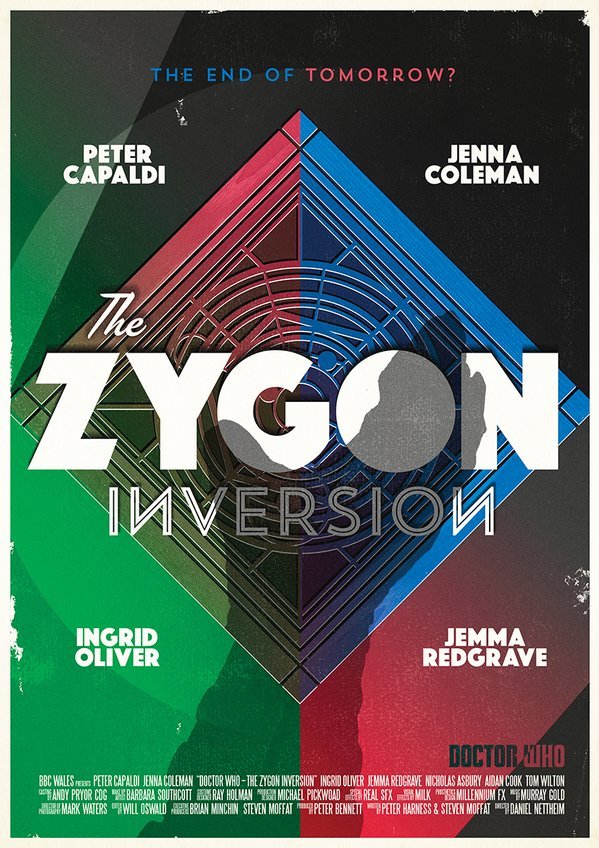 "When you see it, then you'll know why it's called an Osgood Box."
"I don't understand? Are you kidding? Me? Of course I understand. I mean, do you call this a war, this funny little thing? This is not a war! I fought in a bigger war than you will ever know! I did worse things than you could ever imagine! And when I close my eyes... I hear more screams than anyone could ever be able to count! And you know what you do with all that pain? Shall I tell you where you put it? You hold it tight, till it burns your hand! And you say this: No one else will ever have to live like this! No one else will ever have to feel this pain! Not on my watch!"
— The Doctor, explaining what makes him tick since the Time War.
Advertisement:

The one where we learn the Doctor's true name is... Basil!

Also the one where Kate Stewart shows she is definitely her father's child... by shooting stuff. With "five rounds rapid". Twice.

Clara has been replaced by the leader of the Zygon rebels, Bonnie, who's just fired a rocket at the Doctor's plane. Kate Lethbridge-Stewart was attacked by another Zygon in Truth or Consequences, New Mexico. Things look dire.

Clara wakes up in her flat. She goes to the bathroom to brush her teeth, but the toothpaste has turned into disgusting black goo. She goes to her living room and turns on the TV, and sees through Bonnie's eyes. She checks the doors and windows, only to discover they're missing. She checks the newspaper, and finds it reads absolute gibberish, the classic sign of a dream. She sees Bonnie preparing to launch a rocket at the Doctor's plane. Clara jolts the TV to one side, causing Bonnie to miss. Bonnie prepares to fire another rocket. This time Clara manages to delay her from firing. After the plane has been destroyed by the second rocket, Clara rewinds and pauses the "footage", and sees two parachutes among the debris. She smiles.

Bonnie is back in London, and she's after someone. She follows a terrified Zygon, who just wants to live in peace, into his apartment, and does something to him that prevents him from maintaining control over his form. He flees in terror, and is recorded on camera running into a shopping mall in his true form. Bonnie posts this video to the Internet. Clara, dreaming in her pod, manages to covertly text the Doctor a message without Bonnie's knowledge: DOCTOR, I'M AWAKE.

The Doctor and Osgood parachuted out of the plane to safety. The Doctor's parachute has a Union Jack printed on it, which he justifies as camouflage because "We're in Britain!" Osgood broke her glasses on landing, so the Doctor lends her his sonic sunglasses while he jury-rigs a repair. They walk into town. The Doctor checks his messages, and discovers Clara's text. He's somewhat mystified as to why Bonnie would send him something like this, as he believes Clara to be dead. Osgood guesses the truth — that Clara sent it, and Bonnie is unaware. The Doctor and Osgood wind up stealing a van and taking off for London after a run-in with some suspicious police officers.

Bonnie goes to the UNIT safehouse where she knows information on the Osgood Box can be found. She finds a laptop, with the message from the Osgoods seen at the beginning of the last episode, in a safe behind a portrait of the First Doctor. She does not find the box itself, and destroys the laptop in a rage.

So, what is the Osgood Box? What is its role in the peace between humans and Zygons? And what will happen when Bonnie finds it?