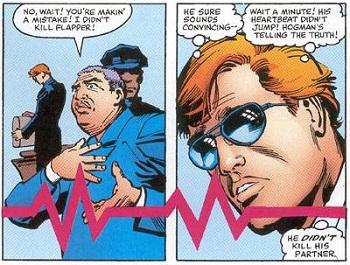 "You know, it's a point of professional pride for me that I can tell when somebody's lying. And you are."
— Leonard Samson, The Incredible Hulk (2008)
Advertisement:

A character with the ability to always know when someone is lying. Sound lame? Other characters who have to spend at least five minutes in their presence don't think so.

It may be the natural ability of an alien or some other non-human species, it may be a super power specific to one human, or it may be the effect of some Applied Phlebotinum. It could also be a prominent fringe benefit of a broader power like telepathy to directly reveal deceptive intent or Super Senses to detect subtle variations in the speaker's heartbeat, breathing, etc.

Some characters get the added bonus of being able to force people to tell the truth (as opposed to just remaining silent) rather than just detect deception.

In some situations, this becomes a Blessed with Suck power. The character can't disable it, so they know whenever anyone is lying to them, driving the character nearly insane from all the lies.

It can also be a learned ability, making this Truth in Television to some extent. This is because many people fidget, look away or do something else when they lie. So if a character is a Living Lie Detector, (s)he could just know what to look for. A police officer being able to tell when a witness is lying after years on the force is a common example of this.

An exceptionally self possessed and clever liar can sometimes be unreadable or even fool the Living Lie Detector. A character may exploit a weakness of the detector: he does not detect "the" truth, but if the tested subject considers something to be true or not. Which is not a minor point: if the villain tells a lower mook that the Doomsday Device has been destroyed, and this mook is exposed to the lie detector, he will say it was destroyed and the detector will check "True!"... and, in the meantime, unknown by the heroes and his own mook, the villain still has the Doomsday Device.

One aspect that goes alongside requirements for the mundane, non-Phlebotinous Lie Detector polygraph, is that there are certain elements that need to be in place for a person to register the normal signs of a lie. One being a baseline observation of the individual's behavior, someone who is naturally jittery means slight twitches don't really mean anything. Another is a threat of punishment, if you're not worried about consequences then you're either not afraid of the truth or you have nothing to lose.

Characters with this power are also highly likely to see through or uncover the Masquerade because of the power.

Could result in some awkward circumstances.

See also Pinocchio Nose, You Can Always Tell a Liar, The Tell. Exact Words can sometimes help against this, but don't bet on it.note Depending on the kind of phlebotinum he uses, the lie detector may pick up on your intent to deceive even if your exact words are literally true.

Bruno can tell when someone's lying based on the flavor of their sweat.

Bruno can tell when someone's lying based on the flavor of their sweat.