Literature / This Book Is Full of Spiders: Seriously, Dude, Don't Touch It 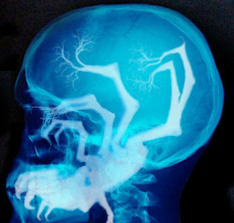 This is, of course, a work of fiction. In real life there is probably no more than a 50 percent chance that a spider has replaced your tongue.

Warning: You may have huge, invisible spiders living in your skull. THIS IS NOT A METAPHOR. You will dismiss this as ridiculous fearmongering. Dismissing things is, in fact, the first symptom of parasitic spider infection: The spider secretes a chemical into the human brain to stimulate skepticism, in order to prevent you from seeking a cure. That's just as well, since the "cure" involves learning what a chainsaw tastes like.
Advertisement:

Another pseudo-autobiographical novel by Cracked Editor Jason Pargin, This Book Is Full Of Spiders: Seriously, Dude, Don't Touch It is the second story about Author Avatar David Wong and the sequel to John Dies at the End.

Still living in [Undisclosed] with John (who (probably) didn't die at the end), things seem to be going fine until Dave wakes up with a large spider-monster injecting him with paralyzing venom and trying to burrow into his skull. After a narrow escape wherein a police officer is infected, a massive outbreak occurs, and John "accidentally" texts photos of his genitals to Dave twice, things somehow get worse. Despite the amount of brain-hugging spiders, gruesome deaths, grotesque monsters and nausea/Nightmare Fuel, things get pretty damn funny.

Released on October 2nd 2012, This Book Is Full Of Spiders currently has a book trailer

A third book, titled What The Hell Did I Just Read: A Novel of Cosmic Horror, was released October 3rd, 2017.