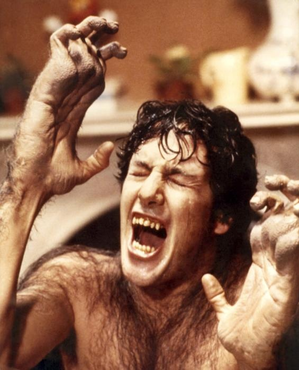 "I didn't mean to call you a meatloaf, Jack!"
"The first, and only, time I tried to become human, I passed out, and I nearly died.
Nothing compares to the pain I felt that day, and since then, all other pain... is numb."
— Vlad, El Goonish Shive
Advertisement:

In order to shapeshift, every part of your body would have to twist and contort. Typically, it’s not acknowledged that would hurt... a lot. In most media, shapeshifting is done quickly and without undue pain for the shifter.

But that isn't always the case. Sometimes, those who take on another form are really going to feel it.

As the name implies, a Painful Transformation tends to be agonizing. While it probably won't leave permanent (physical) injuries, it's still not very pleasant.

There are generally two ways transforming can be painful:

Expect a lot of Anatomy Agony tropes to come into play here. I.e., the character transforming might have their teeth fall out, their fingers twitching painfully, their feet stretching out, etc.