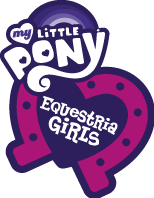 My Little Pony: Equestria Girls, shortened as EG, EqG or just Equestria Girls, is a toyline and media spin-off franchise of My Little Pony: Friendship Is Magic, as well as a sub-series of the "Generation 4" My Little Pony toyline by Hasbro, beginning with the titular movie premiering on June 16, 2013, and had a limited theatrical run at over 200 US and Canadian theaters in June and July of the same year.

Taking place in an Alternate Universe inhabited by pastel-colored human counterparts of Equestria's pastel-colored pony residents, the spin-off series follows the adventures of Equestria's "Princess of Friendship" Twilight Sparkle and her baby dragon assistant Spike in the human world, together with the teenage human counterparts of her "Mane Six" friends — Rainbow Dash, Pinkie Pie, Applejack, Fluttershy, and Rarity. Aside from dealing with overflowing schoolwork, peer pressure, prom dance, and a possible teenage romance, Twilight and the rest of the Equestria Girls have to deal with the various recurring magical happenings that seep from the statue portal to Equestria and into Canterlot High.

Also, various known characters from the main show (and quite some of the popular "background ponies") have made appearances in the franchise as human-like characters, such as Princesses Celestia and Luna, the Cutie Mark Crusaders (Apple Bloom, Sweetie Belle, and Scootaloo), the Apple family, and fan-favorite ones like Muffins "Derpy" Hooves, Vinyl "DJ-Pon 3" Scratch, Lyra Heartstrings, Sweetie Drops and Octavia Melody.

This My Little Pony spin-off then expands to include a series of tie-in toyline, sequel movies, comics, chapter books, mobile apps, soundtracks, three TV specials which aired on Discovery Family in the summer of 2017, a YouTube web series, and two 44-minute TV specials each in 2018 and 2019.

The franchise was put on hiatus in November 2019 with the release of Holidays Unwrapped, a collection of holiday-themed shorts. As per Word of God though, the special is not actually a Grand Finale to the franchise, just the last content produced for it by DHX.

For more detailed info on the Equestria Girls films, see the "Movies" folder above.

Not to be confused with the commercial

Most of the following tropes below are not marked. Expect a LOT of spoilers!

Multiple entries in the My Little Pony: Equestria Girls franchise, or the franchise as a whole, provides examples of: