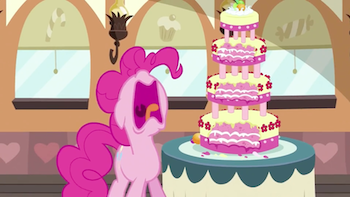 It's like an Agatha Christie novel, but with no corpses and more marzipan.
Pinkie Pie: It's the Marzipan Mascarpone Meringue Madness! It's been... mutilated!
Written by Amy Keating Rogers
Advertisement:

It's a big day for the Cakes: they're entering their newest cake recipe, the "Marzipan Mascarpone Meringue Madness" (or MMMM), in Equestria's National Dessert Competition, and Pinkie Pie is going to make sure that the cake gets there in one piece... even if she has to enlist Big MacIntosh and the rest of the Mane Six into getting it aboard the Friendship Express.

Once aboard, the gang meet some of the other competitors: Gustave Le Grand, a snooty French griffon who thinks his "Exceptionally Exquisite Eclairs" are a shoo-in for first prize; Canterlot's own Doughnut Joe, who's looking to make his doughnut shop world-famous with a scale-model city made out of pastry which he calls "Doughnutopia"; and Mulia Mild, who thinks she deserves the top prize with her intricately sculpted Chocolate Mousse Moose. Rivalries flare, but Twilight manages to calm everypony down and convince them to get to bed early... except Pinkie Pie, who insists on standing watch out of fear that one of the other chefs will sabotage the MMMM.

As the night drags on and Pinkie nearly nods off, she's jolted awake by shadowy figures darting through the cars. She chases them from one end of the train to the other, but somehow loses them both. Pinkie returns to the dessert car to check on the Cakes' cake when the curtains descend, leaving Pinkie Pie in the dark as someone is heard munching on something. Once the curtains are re-opened, Pinkie resumes her vigil convinced that her paranoia was justified... only to immediately nod off.

Morning comes, and Pinkie awakens to find the MMMM intact... or not, as Twilight Sparkle points out by turning the MMMM around to reveal a bite mark in each of its layers, meaning somepony must have eaten it when the lights went out. Pinkie resolves to find out whodunnit by dressing up in a deerstalker cap and bubble pipe and dragooning Twilight Sparkle into playing The Watson to her Sherlock Holmes ("Who asks silly questions with obvious answers!", she puts). Pinkie Pie wastes no time in accusing each of the other bakers of being the guilty party, complete with ludicrous flashbacks to how they did it:

Pinkie Pie is forced to conclude that there's no evidence the other bakers were behind the sabotage of the MMMM and not only that, but she starts to wonder why the other desserts, as tempting and delicious as they look, were completely untouched. Then the train passes through a tunnel, plunging the room into darkness again as some munching noises are heard... and upon the train leaving the tunnel, all the desserts are in ruins and Detective Pinkie is completely stumped.

Pinkie Pie: Now I have no idea who-do-dunned it!

Twilight takes charge of the investigation and sends everyone back to their rooms while she and Pinkie Pie look for clues. The first order of business is to retrace Pinkie Pie's steps from when she was chasing the shadowy figures the other night. Through her thorough investigation, Twilight finds enough clues to figure out the culprit and tells Pinkie Pie to gather everypony together.

Once the other passengers are assembled, Twilight reveals her clues one by one. The first is a blue feather left behind in the caboose. The second is a lock of pink hair found in the conductor's hat. The third and final clue is a false eyelash stuck to the portrait! This means that Pinkie's friends Rainbow Dash, Fluttershy, and Rarity were all responsible for taking bites out of the Marzipan Mascarpone Meringue Madness! The two pegasi and the false-eyelash-wearing unicorn ask for forgiveness, which Pinkie cannot refuse.

That still leaves the question of who ate the other bakers' desserts... a question that Pinkie Pie is eager to answer, now that she knows to look for clues. Mousse in Gustave's mustache, eclair in Doughnut Joe's hair, and sprinkles in Mulia's wrinkles reveals the truth — they each devoured each other's entries! The bakers confess to being unable to resist eating each other's desserts after Pinkie Pie's vivid descriptions. The mystery has been solved but now no one has an entry for the contest... or do they?

At the competition, we witness Pinkie narrating a letter to Celestia about not jumping to conclusions...before a massive cake made from the remnants of the damaged desserts is revealed to the the judges. It instantly wins the blue ribbon and after wrapping up her letter, Pinkie Pie promptly consumes the whole dessert in one gulp! As everyone joins in laughing with the super stuffed and mighty messy Pinkie Pie, the episode ends with the fourth wall being promptly 'eaten'.