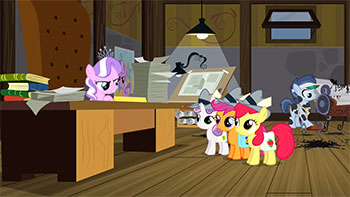 I need gossip! Gossip about ponies!
Rarity: Everypony, please! She's just a harmless schoolpony engaged in a little idle gossip. You're really making too big a deal out of this.
Twilight Sparkle: But it's all lies! Gabby Gums prints what she wants! She doesn't care whose reputation she destroys!
Written by M.A. Larson
Advertisement:

The Cutie Mark Crusaders are inspired to try earning their cutie marks by writing in the school newsletter, the Foal Free Press. Unfortunately, the new editor-in-chief is none other than Diamond Tiara, who wants a newspaper full of "juicy" stories and local gossip. The Crusaders run themselves ragged trying to get stories, but Diamond Tiara isn't impressed with their articles about baby birds, Rarity's new hat, or the history of Ponyville. She throws the Crusaders out and tells them not to return without something she can print.

As luck would have it, the Crusaders and Featherweight (the newspaper's photographer) catch Snips and Snails joined at the hip by a wad of bubble gum. The resulting article, written under the quillpen-name "Gabby Gums", catches the attention of the amused readers. Diamond Tiara demands more stories from Gabby Gums about the secret lives of ponies, but the Crusaders are hard-pressed to come up with anything (other than Snips and Snails getting stuck together again).

Inspiration strikes when Rarity finds Sweetie Belle's copy of the newspaper and gushes about how much her friends would love Gabby Gums' articles. Sweetie Belle convinces her fellow Crusaders to broaden the paper's coverage and start investigating the Ponyville locals for more gossip. The Foal Free Press quickly becomes a hit around Ponyville, even getting sold at the local news stand, while Diamond Tiara relishes the attention the "juicy" stories are bringing in.

At the Spa, the Mane Six discuss the latest Gabby Gums column. Despite Twilight's worry that Gabby Gums' articles are too mean-spirited and invasive, the others brush off her concerns. Even the Crusaders are beginning to get weary of the mud-slinging, but Diamond Tiara starts demanding even nastier articles about the locals of Ponyville. Desperate to get their journalism cutie marks, the Cute Mark Crusaders give in. When they target the Mane Six ("Applejack Asleep on the Job", "Twilight Sparkle: I Was a Canterlot Snob", "Rainbow Dash: Speed Demon or Super Softie?"), the gang decides they need to put a stop to Gabby Gums' harmful rumor-mongering. Rarity still thinks they're blowing things out of proportion... until she reads an article containing excerpts from her diary. Twilight innocently asks if Sweetie Belle would know who Gabby Gums is, since they both work on the school paper — which is all it takes for Rarity to put two and two together. Keeping her suspicions to herself, Rarity loudly insists to her friends that her dear little sister would never associate herself with somepony like Gabby Gums.

Soon after, Rarity finds her diary in Sweete Belle's saddlebag, confirming her suspicions. She proceeds to call her little sister out on the carpet for hurting everypony's feelings with all their gossip. She tells Sweetie Belle that it's an invasion of privacy and proves her point by saying that Sweetie Belle didn't like it when Rarity snooped through her saddlebag. Sweetie Belle revealed that they are only doing it because of how badly they want their cutie marks until Rarity made her realize that trying to earn their cutie marks is not worth the pain and misery they're causing to other ponies.

The Crusaders are ready to call it quits as gossip columnists, but Diamond Tiara refuses to let Gabby Gums end... even if it means blackmailing the Crusaders into digging up more dirt! Desperate to avoid having their own embarrassing candid photos (courtesy of Featherweight) published, the Cutie Mark Crusaders try to find anyone they can interview for the paper. However literally everyone in Ponyville has heard about their secret identity and they all refuse to speak to the Crusaders.

Just as Diamond Tiara is about to follow through with her threat the following morning, the Crusaders burst in with a new story. Diamond Tiara quickly has the staff print it up... too quickly, as it's not a gossip column but "An Open Letter to Ponyville". In it, the Crusaders officially reveal their identity as Gabby Gums, apologize for spreading ugly rumors, and resign from the gossip business.

Once Cheerilee gets the whole story, she strips Diamond Tiara of her position as editor-in-chief in favor of Featherweight, but there's still room at the newspaper for Diamond Tiara... right next to the messy printing press.