Recap / My Little Pony: Friendship Is Magic S1 E12 "Call of the Cutie" 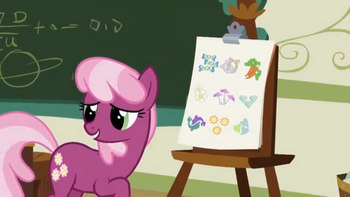 Absolutely not a metaphor for puberty. note Note the magnetic permeability symbol on the chalkboard.
Cheerilee: A cutie mark appears on a pony's flank when he or she finds that certain something that makes them different from every other pony! Discovering what makes you unique isn't something that happens overnight, and no amount of hoping, wishing, or begging will make a cutie mark appear before its time.
Advertisement:
Written by Meghan McCarthy

Apple Bloom is at school one day, listening intently to her teacher Cheerilee delivering a lecture on "cutie marks", the picture on a pony's flank that helps represent who they are and what they can do. Apple Bloom is one of the last girls in her class to get a cutie mark, alongside her nerdy friend Twist. This makes them a prime target for teasing from Diamond Tiara and Silver Spoon, a pair of bossy, spoiled, upper-class fillies who already have their cutie marks, and are only inviting Apple Bloom and Twist to Tiara's "cuteceañera" so they can lord it over the "blank-flanks".

Desperate to get her cutie mark before the big party, Apple Bloom tries to earn her mark by helping her big sister Applejack with the family business. Unfortunately, she's a little too young to help with harvesting, and her hard-sale at the apple stand does more harm than good. Applejack suggests Apple Bloom go to the party with her fellow blank-flank Twist, but much to Apple Bloom's chagrin, she finds her friend has already earned her cutie mark, which prompts a passing Diamond Tiara and Silver Spoon to rub in the fact that Apple Bloom is officially the last girl in her class to earn her mark.

Apple Bloom is sent into a funk, until Rainbow Dash offers to coach Apple Bloom in all manner of activities until she finds what her special talent is. One frantic, slapstick montage later, and the only thing Apple Bloom has earned is a distaste for sports and a few bruises. Fortunately, Pinkie Pie needs some assistance making treats at Sugar Cube Corner, and Apple Bloom brightens at the prospect of earning a cutie mark in baking. Unfortunately, Apple Bloom's attempt at making cupcakes only demonstrates that cooking is definitely not her special talent, and the only thing she gets on her flank is some spilled flour.

Desperate, Apple Bloom begs Twilight Sparkle to conjure up a cutie mark for her, but as Twilight demonstrates, even magic can't force a cutie mark to appear before its time. Bloom is all but ready to give up on going to the cute-ceañera after all... unfortunately, she'd forgotten in her haste that the party is being held right there at Sugar Cube Corner.

Apple Bloom tries to hide her lack of a cutie mark and sneak out of the party, but despite all her efforts she's found out. Diamond Tiara and Silver Spoon start to mock her for being "not special", only for two other blank-flanked fillies, a unicorn named Sweetie Belle and a pegasus named Scootaloo, to rush to her defense. They, and Twilight, point out that still having the potential to become anything can be regarded as special too, turning the crowd positively interested towards Apple Bloom, much to Diamond Tiara's and Silver Spoon's annoyance.

Apple Bloom: You don't have any cutie marks either? I thought I was the only one!
Scootaloo: We thought we were the only two!

The trio resolve to become fast friends, and to help each other find their purpose in life as the "Cutie Mark Crusaders". Twilight, meanwhile, is inspired to write a friendship report about how something you think will alienate you from others can actually lead you to making good friends.