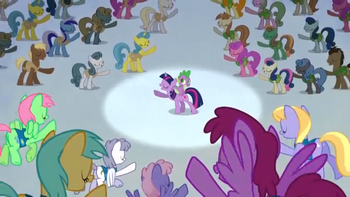 Three months of winter coolness...
Spike: You're good at a lot of things, just not nest-making, ice-skating, animal waking, snow clearing...
Twilight Sparkle: Thanks a lot for making me feel SO much better.
Written by Cindy Morrow
Advertisement:

Winter comes to an end, and Ponyville prepares for an annual cleanup to make way for spring. Since the town was founded by Earth ponies, the tradition for cleaning up the snow and planting seeds is to avoid using magic, leaving Twilight Sparkle, a unicorn whose main talents all involve magic, with a dilemma: what can she do that is useful?

Twilight decides to ask her friends to see what she can do. First, she goes to see if Rainbow Dash's team needs any help, but since they're all pegasi that are either flying off to retrieve the southern birds or clearing away the winter clouds, Twilight obviously can't go with them. She then goes to help Rarity make bird nests, but ends up creating an absolutely horrible nest that Rarity has to spend a lot of time fixing. Twilight then offers to help Pinkie Pie cut lines into the frozen lakes (via ice skates) to make breaking the ice easier, but she's way too uncoordinated to control herself on skates. Next, she decides to help Fluttershy wake up the hibernating animals, but gets scared off by snakes, bats, and skunks. Around this time, Spike suggests Twilight try using a little magic to speed things up, but Twilight doesn't give in until she decides to help Applejack's team plow away the snow. However, Twilight's spell to make her snowplow move (after her muscles prove unable to budge it) ends up causing it to go out of control, crashing and resulting in an avalanche of snow. Applejack chews out Twilight for using magic, and the unicorn runs off, utterly upset with herself.

While Spike tries to cheer Twilight up, an argument over how soon Rainbow Dash's team should clear the clouds for the sun to melt the snow begins to reveal that Winter Wrap-Up isn't going as smoothly as it could, even without Twilight messing up. The mayor bemoans the fact that Ponyville is late for spring every year due to the disorganized way everyone approaches it. Immediately, Twilight gets an idea; after all, she's organized enough to make sure everyone gets their job done! With the help of Twilight getting everyone to do their jobs efficiently and as a team, spring arrives on time, and Twilight is officially assigned "All-Team Organizer", finally ensuring that she has a job to do.

The residents of Ponyville work together to change the season from winter to spring, which includes clearing the ice and snow, making nests for and ushering back the southern birds, and waking up the hibernating animals.

Example of:
Painting the Frost on Windows

The residents of Ponyville work together to change the season from winter to spring, which includes clearing the ice and snow, making nests for and ushering back the southern birds, and waking up the hibernating animals.