Recap / My Little Pony: Friendship Is Magic S1 E1 "Mare in the Moon" 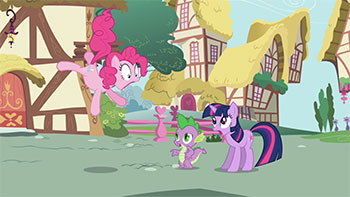 Written by Lauren Faust
"Once Upon a Time, in the magical land of Equestria..."

Our story begins with a unicorn named Twilight Sparkle, who sits alone by a tree, reading up on the history of Equestria and the tale of Nightmare Moon. Long ago, two sisters ruled the land; the elder raised the sun at dawn while the younger raised the moon at dusk. One day however, the younger sister grew resentful of the fact that the ponies played in the day, yet slept through her wonderful night. She became bitter and one night refused to lower the moon. The elder sister was forced to use the power of the Elements of Harmony to banish her sister to the moon. While she is heading home, Twilight ignores her unicorn classmates' request to come to a party hosted by Moondancer, and they snub her aside for being more interested in books than friends. After some further research, Twilight Sparkle is convinced that soon the Mare in the Moon will return for her revenge "on the longest day of the thousandth year"... which happens to be the upcoming Summer Sun Celebration. She tells her baby dragon assistant, Spike to send a letter to Princess Celestia, ruler of Equestria and Twilight's trainer, on the matter and she doesn't like the response:

Advertisement:
Spike: Ahem... "My dearest and most faithful student Twilight: You know that I value your diligence and that I trust you completely... but you simply must stop reading those dusty old books!"

Celestia tasks Twilight with supervising the preparations for the Summer Sun Celebration in the small town of Ponyville, knowing there's more to a pony's life than just studying, and gives her a secondary task of finding and making some friends. Firmly believing that the fate of the world does not rest on her making friends like what the princess said, Twilight arrives in Ponyville to fulfill her royal duty. Spike asks Twilight to attempt socializing with others, directing her to a pink Earth Pony passing by. When Twilight greets the stranger, the pink pony gasps and runs away. Now certain that she's the only sane pony in the village, Twilight grudgingly does her job.

First, she visits Applejack, an Earth Pony of Sweet Apple Acres, hoping to quickly check on the food preparations and be on her way. Instead she's introduced to Applejack's huge extended family and plied with all manner of apple-based foods. Shortly after leaving with a full stomach, she's swept off her feet by an athletic pegasus named Rainbow Dash and knocked into a puddle of mud. After a number of futile attempts to clean her up, Twilight is left with a fluffed-up mane and Spike and Rainbow are left in tears of laughter. After they regain their composure, Rainbow reveals what she's doing for the festivities: taking care of the weather. She's the fastest Pegasus in Ponyville and she proves it by clearing the sky of clouds in Ten. Seconds. FLAT.

Next on the list is Rarity, a unicorn who's in charge of the decorations. Spike is smitten instantly while Rarity is shocked and appalled by Twilight's messy mane. Insisting that she fix it up, she runs Twilight through a number of costumes (and gushes over her dreams of moving to Twilight's hometown of Canterlot) before Twilight drags Spike from the boutique and out to the edge of the woods where the bashful pegasus Fluttershy is leading a choir of songbirds in rehearsal. Unfortunately, Twilight appears at a bad time and startles both the birds and poor Fluttershy. Despite her best efforts, Twilight can't get the Fluttershy to talk to her... until she sees Spike. After Spike literally tells Fluttershy his life story, Twilight brushes her off and drags Spike into the library with her. Hoping to finally get some time to herself, she turns on the light...

Oh look, it's that pink pony from earlier. She won't stay still and she won't shut up either. She introduces herself as Pinkie Pie, and while she's explaining at a mile a minute that the reason she dashed off was to set up a surprise welcoming party, Twilight unwittingly pours herself a drink of hot sauce, which Pinkie then eats on a cupcake without a second thought. Running to her room, Twilight ponders the idea that these new ponies are her friends and worries over whether or not the Mare in the Moon will really return. Before she has time to fret any further, she's beckoned to the town hall to watch the sun rise.

Once there, the mayor of Ponyville introduces to much fanfare, Princess Celestia!... Who never appears. She's gone without a trace. However a certain somepony takes her place... the Mare in the Moon, Nightmare Moon. She's going to take her revenge by plunging Equestria into eternal night.

Nightmare Moon: Remember this day, little ponies, for it was your last. From this moment forth, the night... will last...forever! MWAHAHAHAHA!

Continued in "Elements of Harmony".

Spike, who is basically a 10-year-old kid, becomes smitten with Rarity, who is a young adult unicorn.

Spike, who is basically a 10-year-old kid, becomes smitten with Rarity, who is a young adult unicorn.