Continued from "Mare in the Moon". 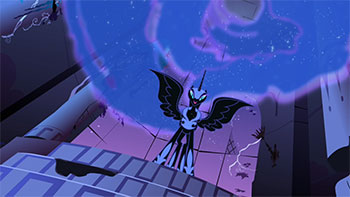 "The night... will last... FOREVER!"
Also known as "Friendship is Magic, part 2".
Twilight: Look, I appreciate the offer but I'd really rather do this on my own.
Applejack: No can do, sugarcube! We sure ain't letting any friend of ours go into that creepy place alone. We're sticking to you like caramel on a candy apple!
Pinkie Pie: Especially if there's candy apples in there!
[other ponies nod in agreement; pause; Twilight Sparkle looks at Pinkie Pie]
Pinkie Pie: What? Those things are good.
Advertisement:
Written by Lauren Faust

Picking up from the last episode, Nightmare Moon departs as dramatically and suddenly as she arrived, leaving the citizens of Ponyville wondering what to do. Twilight Sparkle returns to the library to do some research, putting the baby Spike to bed beforehand. As she searches frantically for information, Applejack, Fluttershy, Pinkie Pie, Rarity and Rainbow Dash show up, all having figured out that the newcomer knew about what was going to happen. Realizing that they weren't going to leave without answers, she tells them about uncovering the prophecy on Nightmare Moon and the only thing that can possibly stop her: the Elements of Harmony. With the help of Pinkie Pie, Twilight finds a book on the Elements of Harmony ("It was under E!") which names the five known ones (Honesty, Kindness, Laughter, Generosity and Loyalty), with the sixth currently unknown, and pinpoints their last known location... in an abandoned castle in the Everfree Forest.

Twilight sets out for the ruins, with her new acquaintances insisting on coming along. She is reluctant, but this proves fortunate, as Nightmare Moon is following them and her attempts to thwart their quest give Twilight's companions a chance to show her their strength of character:

On finally reaching the keep, Twilight investigates the Elements of Harmony and tries to trigger the "spark" that is said to make the sixth Element appear. Just then Nightmare Moon appears and steals away with Twilight and the Elements in an effort to prevent this from happening. Much to her surprise, Twilight refuses to be cowed:

A brief struggle ensues as Twilight tries to recover the elements but eventually Nightmare Moon simply smashes them to bits. All hope is lost...

...then Twilight hears her friends coming to her rescue, has an epiphany, and the seemingly-destroyed elements activate. Twilight explains to a baffled Nightmare Moon, that the real power of the elements was within her five friends and herself realizing how much they meant to her was the "spark" needed to awaken the Sixth Element, Magic. With the combined powers of the Elements of Harmony, they make swift work of Nightmare Moon.

As the sun finally rises, Princess Celestia reappears to congratulate Twilight and her friends. She was aware of the prophecy and knew Twilight had the power to save the world but only told her to make friends in the hopes that her student would learn the power of friendship and allow its power to spark the Elements. She proceeds to reconcile with Nightmare Moon who has returned to her original form... Princess Luna, Celestia's long-lost sister. Turns out that the two sisters in the original legend of Nightmare Moon were Luna and Celestia. Go figure!

Celebrations are in order, Luna is ready to resume her duties of raising the moon at night and Twilight Sparkle is ready to return to Canterlot... except the once-antisocial unicorn is reluctant to leave her new friends so suddenly. With Celestia's blessing, Twilight decides to remain in Ponyville and continue her studies on the magic of friendship.

When trying to fix a bridge, Rainbow Dash encounters the Shadowbolts made by Nightmare Moon, who coax her into becoming their captain, but with the ultimatum of choosing either them or her friends. She chooses the latter, because she would never abandon her friends for anything, making her the Element of Loyalty.

Example of:
Friend or Idol Decision

When trying to fix a bridge, Rainbow Dash encounters the Shadowbolts made by Nightmare Moon, who coax her into becoming their captain, but with the ultimatum of choosing either them or her friends. She chooses the latter, because she would never abandon her friends for anything, making her the Element of Loyalty.