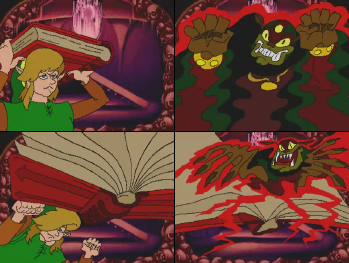 Tired of putting up with Ganon's repeated crimes, Link threw the book at him.
Advertisement:

Whoa, not so fast there, sport! You can't go rushing out on your way to punch out Cthulhu. You see, the Big Bad is way too powerful for you to handle at your base power. You would be dealt a Curb-Stomp Battle in probably less than a second.

However, there is a way to defeat him. It doesn't just make the Big Bad easier to deal with, it's the only way to take him down. There is an artifact that has the ability to take him down, but it's able to be handled by anyone. It may be because the villain is an embodiment of evil and said artifact is made of enough goodness that it smites his evilness. It may be a Weapon of X Slaying, where X is this particular villain. It may be because the object is an Amplifier Artifact that boosts the hero's power to match the villain's. It may be that the item is an Immortal Breaker weapon that can puncture the villain's otherwise-invulnerability. In that case, it's best to be careful with it so that it does not fall into the villain's hands.

Subtrope of Plot Coupon That Does Something. Sister Trope to Sword of Plot Advancement.