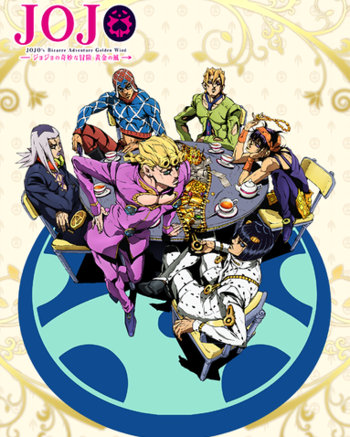 Golden Wind (黄金の風, Vento Aureo), is part 5 of the long-running JoJo's Bizarre Adventure series. It is preceded by Diamond is Unbreakable and followed by Stone Ocean. This part's original run on Shonen Jump went from 1995 to 1999.

Set in 2001, Golden Wind stars Giorno Giovanna, the son of DIO who was conceived with Jonathan Joestar's body after his resurrection in the 1980s. Having inherited both the righteousness of the Joestars and the ruthless ambitions of DIO, following a massive crime wave in Italy, he seeks to take over The Mafia in order to turn it into an organization for good instead of crime. After a brief scuffle with a Stand-using mafia assassin named Bruno Bucciarati, the two realize that they share a common goal, and so Bucciarati allows Giorno to join his squadron of Stand-using gangsters, which also includes Leone Abbacchio, Guido Mista, Narancia Ghirga, and Pannacotta Fugo.

The events of the story were adapted by Capcom into a 2002 Beat 'em Up for the PlayStation 2. An international release was announced under the title GioGio's Bizarre Adventure but was cancelled note Due to Capcom's license for JoJo expiring. In October of 2018, a fan-translation patch into English was released for the game

Two light novels have been released that feature stories based on Golden Wind. The first, Golden Heart, Golden Ring, was released in 2001. It was written by Shotaro Miya and Gichi Otsuka, with illustrations by Araki, and features a story shortly after the first encounter with the Boss, and the apparent betrayal of one of the team members. The second light novel Purple Haze Feedback was released as part of the series 25th anniversary celebrations in 2011. Written by Kouhei Kadono with illustrations provided by Araki, it is set after the events of Golden Wind and follows Pannacota Fugo as he deals with the aftermath of decisions made in Golden Wind. However, as with other light novels created for the series, it has not been released outside of Japan and is generally treated as Loose Canon.

Would humans taste bad because we eat meat?

Would humans taste bad because we eat meat?