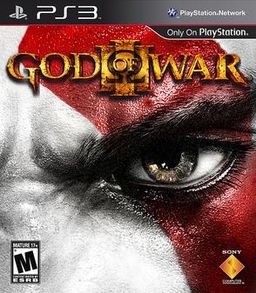 In the end, there will only be chaos.
"My vengeance... ends now."
— Kratos, from the main menu when starting a new game
Advertisement:

God of War III is the third (chronologically final, until the PS4 game) installment of the God of War series, released for the PlayStation 3 in 2010.

Picking up right where the previous game left off, it details Kratos and the Titans' assault on Olympus. After killing Poseidon, Kratos is betrayed by Gaia and tossed into the underworld, but escapes and begins to climb Mount Olympus, killing all who stand in his path — Hades, Helios, Hercules, Cronos, Hephaestus, Hera — and learning that Pandora's Box still exists, now deep in the Labyrinth and guarded by an eternal fire which can only be snuffed out if Pandora herself immolates herself on it. This proves troubling, because as Kratos escorts Pandora through the dungeon, he quite possibly begins to think of her as a daughter. Kratos wants to kill Zeus, but he also wants his family back. Which one will he choose?

The game got an enhanced rerelease in Summer of 2015 for the PlayStation 4.