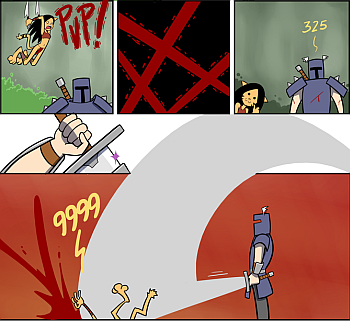 Good luck going through that enemy 17 more times.
"One blow...that was all it took. One blow delivered by some of the mightiest sinews in existence, fueled by anger and guilt and need, laid low all twelve of the heroic attackers. It happened so fast that Thok was not even sure Brutaka had moved. But the proof was strewn on the chamber floor before him in the forms of six half-dead Toa Nuva and six possibly very dead Matoran."
— BIONICLE, "Dark Destiny"
Advertisement:

The name comes from the act of forcing someone to lie down in the street and bite the curb, then stomping on the back of their head. This could be very humiliating, especially if they were to die. Even if the victim were to survive, they may be missing some teeth and have a severely broken jaw.

Compare Pendulum War, which is where sides take turns to perform this trope upon each other. In Professional Wrestling, this frequently overlaps with Squash Match. In video games, see Flawless Victory. Breather Bosses, Zero-Effort Bosses, and Anticlimax Bosses are the types most likely to be on the receiving end of a Curb-Stomp Battle. If this is done to the heroes, on the other hand, it becomes a Hopeless Boss Fight, often from a Hero Killer (or is at least a sign that you're going to have to do a lot more Level Grinding to get past that Beef Gate). Compare No-Sell, where one side thoroughly wins because they can shrug off whatever the other can do. Contrast Story-Breaker Team-Up. If the curbstompee manages to get a few good hits in to show that he or she is not totally helpless, it's a Curb Stomp Cushion. A No-Holds-Barred Beatdown is similar, but much more realistic, brutal, and violent. And more importantly, the one dishing it out doesn't necessarily win in the end. In fact, foes that manage to withstand such a beatdown often get a chance to return the favor. That said, many curb-stomp battles happen to be no-holds-barred beatdowns (but it's just as possible for a curb-stomp battle to be over in just a few blows, if not just one, whereas a no-holds-barred beatdown is always a prolonged smorgasbord of violence). Also compare Single-Stroke Battle, which are also one-sided, but are decided by the attacker using a single move to win rather than drawing it out. See also One-Man Army.