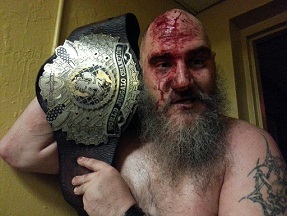 Dylan Keith Summers (born July 13, 1973) is a retired American Professional Wrestler from Morgantown, WV, who worked from 1998 to 2016 as Necro Butcher. He is best known for his participation in ultraviolent death matches for CZW, IWA Mid-South, Juggalo Championship Wrestling, Big Japan Pro Wrestling and other hardcore promotions. Among his in-ring achievements, he is a former CZW World Tag Team Champion