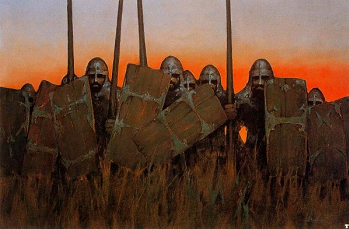 Dawn attacks are particularly popular in Real Life as well as fiction. It is generally assumed that surprise attacks are most likely to take place at dawn. This allows the attackers to move into place during the cover of the night, while using the first light of the morning to see well enough for the actual attack. There is also the hope that an attack just before or just at dawn will catch the enemy while most of them are still sleeping or just waking up, and are therefore not fully alert. Also, as dawn is a time of transition between dark and light, the theory is that attacking at dawn allows you to catch the enemy while their eyes have not yet fully adjusted to the morning light. For an extra bonus, you can attack from an direction that will result in the enemies being blinded by the glare of the rising sun. Finally, attacking at dawn means that you have the full day of light to press the attack, an important consideration before the modern age of night-vision and electric lights.

Of course, the irony of this tactic is that it has been so heavily used that most military forces now use the practice called "Stand-To-Arms", where the entire defending force wakes up sometime before dawn and goes to a full defensive alert, with every soldier in their battle positions. In WWI, this resulted in the rather surreal situation where an army would mobilize each morning to prepare for an attack that can't possibly come—as the enemy was also busy standing-to-arms.

For fictional purposes, the Dawn Attack adds extra drama to a scene, symbolizes transitions and new beginnings, and (in visual mediums) allows for just enough light to be able to clearly portray the action.