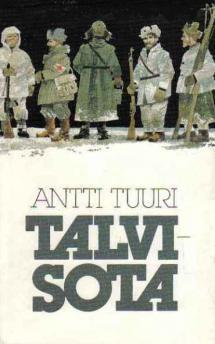 In the afternoon they came again, supported by tanks and artillery, at about one o'clock, and we battled them until eight in the evening. They started to believe that it's difficult to come to Finland through there, and at eight in the evening they stopped fighting for the day. We started looking at what the Russian had managed to do to our positions and fixing them. We waited for warm food. Six tanks were burning and smoking in front of the lines, and many neighbor's men were lying there. No food came, and there would not have been many eaters either.
Advertisement:

The Winter War (Finnish: Talvisota) is a Finnish novel by Antti Tuuri, published in 1984. It was directed into a movie in 1989. The novel has been translated into English by Richard Impola.

In the novel, Martti Hakala, as an old man, tells his story about participating in the Winter War between Finland and the Soviet Union 1939-1940, as a Finnish rank-and-file reservist. The infantry regiment JR 23 that he is assigned to first sees action in Taipale, and later in Äyräpää. The story is fictional, but it is based on diaries and interviews of real veterans and other first-hand sources, and real persons like the regiment commander Matti Laurila appear in the story.

The plot is simply a story of the war, so there is little character building and dramatic arc, but the narrator's own experiences and the anecdotes he shares form a picture of what the Winter War was like for an infantryman on the Karelian Isthmus.