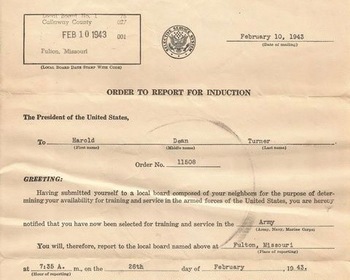 "Greeting!"
"There's a war going on! And it's time that you knew
Every lad in this land has his duty to do."
— General Genghis Kahn Schmitz, I Had Trouble in Getting to Solla Sollew
Advertisement:

In a nutshell the word "conscription" means forced service in one's country's armed forces or civil services on pain of prison or (worst case scenario) death.

Some people who find themselves in armed conflict aren't there by choice. Nations both real and fictional enact campaigns of conscription, forced military service, for a variety of reasons. Maybe they are a small nation overwhelmed by a superior opponent. Maybe a war of attrition has left their forces decimated and badly in need of additional manpower. Maybe making it really easy to opt into alternative non-military service is cheaper and easier (for the government) than hiring hospital orderlies and highway clean-up crews on the open job market.

In many countries the conscription serves as a Rite of Passage: a man is not considered to be a man unless he has served his conscription tour of duty. Conscription may also be the tyrant's method of breaking the will of his subjects and subjugating them to blind obedience. Another reason for conscription is to foster a sense of national solidarity; everyone will have the same experience of serving in the armed forces. Whatever the reason, conscription has a long history in both fiction and the real world.

But conscription is a double-edged sword. Like most armies, conscripts were often drawn from the lower classes of society — on average poorer, less educated, inferior in discipline, and less loyal than volunteer forces to their upper-class commanders and rulers. And the rich, powerful, talented, or well-connected could often find ways to get out of serving or serving in units with very little chances to actually go to actual war, anyway. It is also perfectly possible you end up, at the end of a war, with a significant number of lower class individuals with combat experience, access to weapons and a grudge against the higher echelons of society.

In cases of emergency, Lowered Recruiting Standards can occur.

Conscription is the Trope Codifier for Cannon Fodder and for Men Are the Expendable Gender, and Trope Maker for Slave Mooks. Draft Dodging is when someone who has been conscripted seeks to get out of it somehow. See also Press-Ganged for when this is done with brute force, or Got Volunteered for when it might as well be. Also see Pre-War Civilian Career for what they did before their military service.

Not to be confused with Drafting Mechanic.