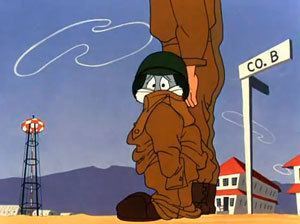 Bugs Bunny is going about his daily business when a letter meant for someone else winds up in his rabbit hole. To his horror, he learns that it was a draft notice for the United States Army. Between the physical exam at the Induction Center and the training session with the exasperated Sergeant First Class he is assigned to, Hilarity Ensues.

Surprisingly, there are little to no pratfalls or stock gags associated with a typical Looney Tunes cartoon. Most of the humor comes from Bugs being out of his element and causing havoc accidentally rather than deliberately.