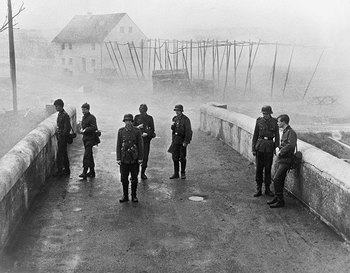 The Bridge (Die Brücke) is a 1959 film from West Germany, directed by Bernhard Wicki.

It is late April, 1945, and World War II is almost over. The shooting hasn't stopped yet, however, and the residents of one small town in southern Germany are acutely aware that the Americans are getting quite close. The film centers on seven boys in their mid-teens: Hans, Albert, Walter, Jurgen, Karl, Klaus, and Sigi. The boys are schoolmates and friends. Hans is a refugee from urban bombing. Walter's father is the local Nazi party boss. Karl has a crush on the sexy girl who works at his father's hair salon. Klaus has a budding romance with his classmate Franciska. Jurgen's father was killed in action in the war. Sigi is the smallest and often gets teased by his buddies.

The boys are wrapped up in the usual teen angst and drama, with a little extra excitement caused by the war, which they're tracking with pins on the maps in their classroom. However, fun and games suddenly end when the boys are drafted into the Wehrmacht. After barely a day of military training, they are thrown into the defense of their local bridge, with tragic consequences.

Vicco von Bulow, aka "Loriot" the German comedian, has a small part as a Wehrmacht soldier.