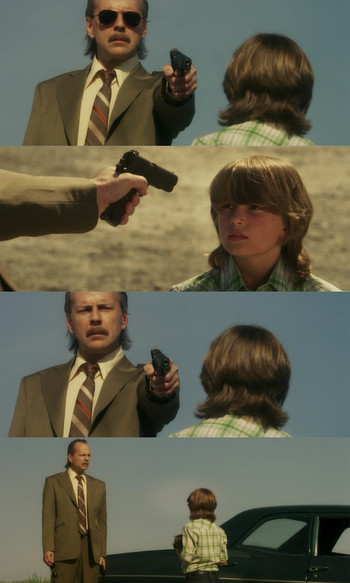 His employers thought he was the only one who could kill a kid. They were wrong.
"No women, no kids."
—Léon, The Professional
Advertisement:

Many adult viewers and writers are upset about kids being harmed. Kid viewers aren't, but then, kids aren't the ones doing the writing, are they? As a result, many characters on TV Wouldn't Hurt a Child.

This is often done simply by not showing kids at all in action and suspense shows, but sometimes it's rather conspicuous when characters seemingly go out of their way to not hurt kids, or circumstances happen to conveniently align themselves so that kids don't get hurt. For example, a slasher movie where the slasher just happens to not encounter children in hiding, or the kids manage to be rescued just in time, while the adults and teens get killed. It's also pretty common that when Even Evil Has Standards, not harming children is one of them.

This does not mean that the act cannot be referred to in the story. You'll hear characters in plenty of films and TV shows talking about the antagonist harming or killing children. That is much different from actually showing it on-screen.

In fact, when this trope does get averted and children do get harmed, it can often be shocking for the audience.

See Also Wouldn't Hit a Girl for the female-specific version of this trope. See Friend to All Children for those adults who not only don't hurt kids, but will actively protect them (even if the adults in question are clearly evil). For video games, see Hide Your Children, where children aren't even portrayed so as to avoid the implications that they could be hurt. For a more specific form of Wouldn't Hurt a Child, in which very young children are shielded from danger by the plot due to society's squeamishness about hurting babies, see Improbable Infant Survival.

A common subversion is when a character who goes by this motto has to face a Creepy Child, a Child Soldier, or worse an Enfant Terrible.

Played with in the cases of Villainous Parental Instinct, when it isn't that the person wouldn't hurt a child, but that they won't hurt their child.

May be a form of Heroic Vow.

Oddly enough, it's also Truth in Television as many gangs, such as the Mexican Mafia, brutally murder their members that hurt children. This even extends to prison, where inmates, or even prison-based gangs, that welcome robbers and murderers into their fold will not tolerate someone who hurts a kid. In fact, killing one of these people often results in being well liked by the other inmates (people imprisoned for child molestation are often put into solitary confinement, not as punishment, but for their own protection, due to a combination of this trope and Rape Is a Special Kind of Evil). Of course, this can also be seen as a Moral Myopia, as there have been criminal gangs (especially Mexican drug cartels) and terrorist organizations (such as ISIS and Al-Qaeda) that use children for prostitution, drug trafficking

Can overlap with Pragmatic Villainy, as while a villain may have no personal qualms with harming a child, they are well aware most of the world does. Harming a child would only complicate their plans by creating more enemies than they may be equipped to handle, and/or alienate potential and current allies.

Contrast Child Hater and Would Hurt a Child.

Examples and subversions: (All inversions/aversions go under Would Hurt a Child)

Alternative Title(s): Wouldnt Harm A Child, Would Not Hurt A Child