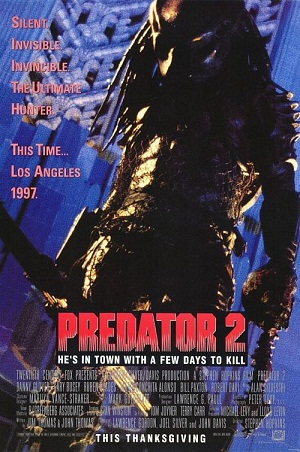 "He's in town with a few days to kill."
— Tagline
Advertisement:

Predator 2 is the sequel to Predator, released in 1990.

Ten years after the events of the first movie, Los Angeles is under a Heat Wave, and a war between Jamaican and Colombian drug cartels is running wild. LAPD Lt. Mike Harrigan (Danny Glover) and his team find that something is killing members of both factions — and after meeting a fake DEA task force, led by Special Agent Peter Keyes (Gary Busey), Harrigan discovers that said something is an alien, and the "task force" have been waiting for one to reappear since previous events in Central America (and apparently

they know how to dance).

You can't see the eyes of the demon, until him come callin'.''