Turn Off the Camera 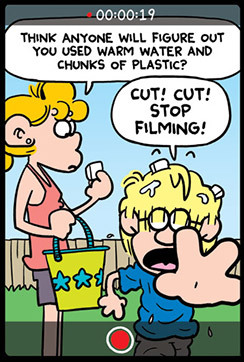 "Hey, you nutcase. Put that camera down and get this lady to a hospital! TV news... sheesh!"
— Spider-Man, The Amazing Adventures of Spider-Man
Advertisement:

Something to Hide: The Corrupt Corporate Executive, rock star or other celebrity on a TV show is asked a rather uncomfortable question, and doesn't want to damn himself in front of thousands of witnesses armed with video recorders.

Blocking The Fourth Wall: This covers all the other times, when the person just wants the camera crew to stop sticking a camera in his face.

Have Some Decency: Rarer is when it's an offence to human decency - it's not something that should be filmed and used as entertainment.

In any case, the plea is the same: "Look, Turn Off The Camera". Very much Truth in Television. Compare Film the Hand.

Peter asks Quagmire to cut the camera when the former is being mauled by a puma.

Peter asks Quagmire to cut the camera when the former is being mauled by a puma.