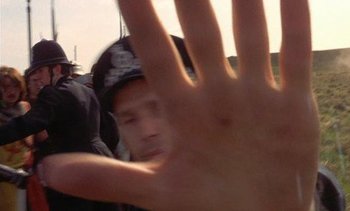 When someone really doesn't want to be filmed, they'll stick their hand in front of or over the lens.

For someone filming hands doing something, that's An Insert. Or Hand of Death.

When someone accidentally blocks the lens with their own hand, that's Camera Obscurer. Compare Turn Off the Camera and Talk to the Hand.