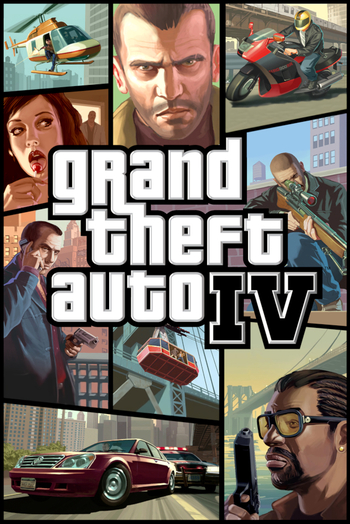 Grand Theft Auto IV is the fourth Numbered Sequel of the Grand Theft Auto series, the first one to appear on a seventh generation console, and the start of a new continuity. It was also, thanks to a famous slip-up by Sony over renewing their previous contract with Rockstar for exclusive publishing rights, the first entry to get a simultaneous Multi-Platform release, as well as the first to have downloadable content. The game certainly takes advantage of the new hardware to the fullest - character models are much more realistically detailed and animated, as is just about everything else.

Set in 2008, the story follows Niko Bellic, a veteran of the Yugoslav Wars who turned to crime in an attempt to track down the traitor who got his squad killed. After he's nearly busted in a smuggling operation on the Adriatic Sea, he decides that it's time to move on from criminal activities and sets sail for Liberty City in the United States, where his cousin Roman claims to have become a self-made millionaire.

Unfortunately, Roman's stories turn out to have been highly exaggerated, his "mansion" a dockside slum and his "sports car" a taxi cab. On top of that, his gambling addiction has caused him to take out loans from Albanian Gangsters and The Mafiya, placing him in nigh-inescapable debt. Determined to help out his cousin, and hoping to investigate a lead regarding the traitor, Niko is forced to delve back into his past life of violence to survive.

One of the biggest changes from previous installments was IV's ability to take advantage of the Internet connectivity that virtually all consoles of the time had built-in. A number of multiplayer game modes are offered, from classic deathmatch and team deathmatch to team-based co-op missions. There's even an open sandbox mode so you can run around Liberty City doing whatever you want, be it with your friends or complete strangers.

Before the game's release, Rockstar signed a $50 million deal with Microsoft to produce two downloadable expansion packs exclusively for the Xbox 360 in 2009. Of course, this was a major flashpoint in the Console Wars. The first of the two was released in March, while the second one was released at the end of October. PS3 and PC owners could rejoice as these previously exclusive expansions came out for their formats in April 2010. If you have tropes for the Episodes from Liberty City (as their compilation release is called), put them on their respective pages, linked here:

Grand Theft Auto IV is the Trope Namer for:

open/close all folders
A - K
L - Z
So this is what the dream feels like. This is the victory we longed for...
Feedback

Niko is tasked by Little Jacob and Badman to follow a rival drug dealer to his hideout. While doing so without being detected, Roman can call and unknowingly alert the guy that Niko is following him.

Niko is tasked by Little Jacob and Badman to follow a rival drug dealer to his hideout. While doing so without being detected, Roman can call and unknowingly alert the guy that Niko is following him.