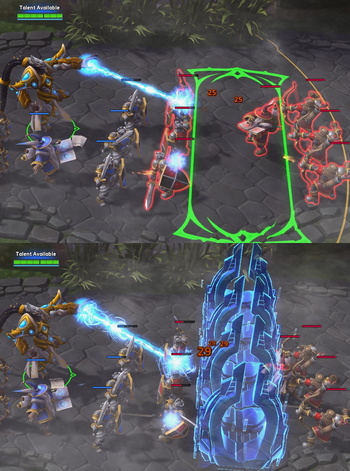 "Take cover? No, I make cover!"
So, you and your squad are off on a mission. You've got armour, guns, grenades, etc. - everything you need. But there's a catch - on this mission, there is likely to be little cover. What do you do? Take some of your own with you, of course!
Advertisement:

Deployable Cover can be anything from an energy barrier that deflects bullets to a big pavise that can be planted into the ground to protect you from arrow volleys. Often, the deployable cover won't be as durable as natural cover, eventually getting destroyed after it is shot enough (though, in the case of an energy shield, it may reactivate after a short time). It will, however, last indefinitely if it is left alone.

If you carry the cover with you whilst making use of it, then it's closer to a shield.