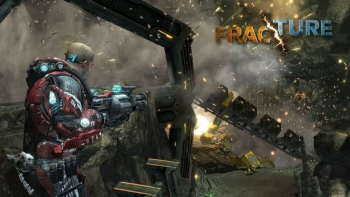 The ground is your weapon. That sentence pretty much sums up Fracture, a third-person shooter video game developed by Day 1 Studios and LucasArts for the PlayStation 3 and Xbox 360. Set in the year 2161, Fracture tells the tale of a xenophobic United States which has been split into two sides, the Pacific and the Atlantic, by rising water levels caused by global warming. The Atlantic is devoted to advancing the technological prowess of humanity (cyborgs), while the Pacific is devoted to enhancing the human genome (bioengineering). The game's biggest claim to fame is that both sides can manipulate the local environment to their benefit and their opponent’s detriment. This is called “terrain deformation,” or TD, and it can be as effective as raising the ground to access higher locations or lowering the ground to undermine a structure and cause it to fall. It comes in handy in many ways and also looks pretty damn cool in use.

Other than that, Fracture is a fairly solid third-person shooter. Unfortunately, it was panned by critics for lack of replayability and repetitiveness as well as taking multiple features from other shooters such as Halo, Gears of War and Resistance.