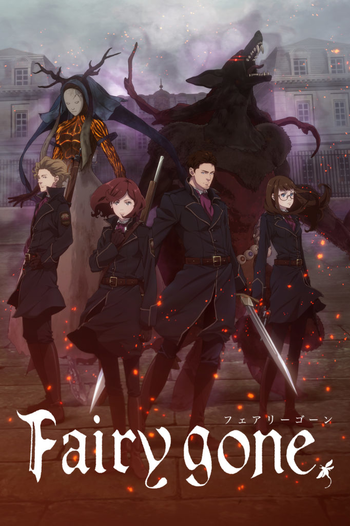 Left to right: Serge Tova, Marlya Noel, Free Underbar, Klara Kysenaria.
"Once, a fairy was a weapon."
— Anime Tagline
Eastald: A land where fairies possess and reside within animals, granting them special powers. By surgically removing and transplanting the organs of a possessed animal into a human, people can partially summon the fairy and use it as a weapon. In U.E. 481, all of Eastald is engulfed in a great conflict known as the War of Unification. During this war, the use of "Fairy Soldiers," humans who have been modified in this manner, becomes commonplace.
Advertisement:

It is now U.E. 505, nine years after the war's end with the Empire of Zesskia claiming victory. The few surviving Fairy Soldiers find themselves struggling to adapt to peacetime: some continue to work for the new government, while others pursue darker paths, turning to terrorism or organized crime. Marlya is a new recruit of the organization "Dorothea," a government agency dedicated to the investigation and suppression of fairy-related crimes and incidents in a nation still suffering from instability and chaos.

Produced by P. A. Works (of Angel Beats! and Tenrou Sirius the Jaeger fame), written by Aoi Jumonji (of Grimgar of Fantasy and Ash fame) and directed by Kenichi Suzuki (of Drifters fame). The series spans 24 episodes, with the first half airing in the Winter 2019 season and the second half in the Fall season.

Funimation announced that an English voice track will be released to English-speaking countries/territories on April 28, 2019.