Just For Fun / Television Is Trying to Kill Us 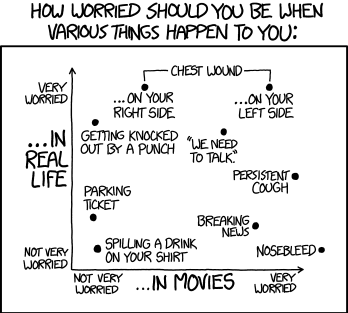 If the breaking news is about an event at a hospital or a lab, move it all the way over to the right.
"People will wait to call the EMS because the EMS providers will insist on interrupting the game to get information. Grandpa will be just fine for another hour and a half because (and I quote) 'those neurosurgeons can just turn him back on, you know, like in that movie?'"
— A medic

Fiction is not reality. While fiction rarely shows the negative consequences of a trope, reality is not as forgiving. Every trope here can have serious if not fatal repercussions in reality if people treat them as if they were true. These may originate as a case of Reality Is Unrealistic. See also Do Not Try This at Home, Things We Have Learnt from Media, Things Are More Effective in Hollywood and TV Tropes Will Ruin Your Life. The result of doing something on this index may well be a Darwin Award.

Unfortunately this is more dangerous than most people realize. Even though most real people don't consider fiction a reliable source of information, people don't usually remember where they learned stuff from, even just in the broad categories of 'reliable source' and 'unreliable source'. (See Unconventional Learning Experience)

This is an index. A description of why a trope fits here is fine but examples should go on the respective trope pages. Try not to add 300 additional bullet points if it can be helped.

Alternative Title(s): Television Is Trying To Kill You