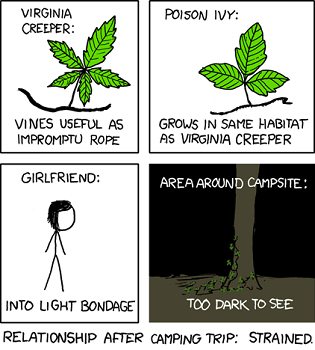 Friggen' modern tents don't have a single piece of rope.

A character is in a very nature-oriented setting, with all kinds of wild plants surrounding them. They're doing whatever it is they planned to do, and at some point pick up or walk into an ordinary-looking plant. After a small amount of contact with it, someone who is more knowledgeable about nature will casually inform them "That's poison ivy" (or poison oak, the plants have the same toxin).

Note: These are generally played for laughs. If you're weak of stomach, do not Google the types of injuries these plants can create (Unless you'd really like to see an example of a blister the size of a football). Oh, and poison sumac, if burned, releases a gas that causes allergic reactions that can kill. It really pays to know your plants before you go hiking.

Having a slime girl around is a handy way to pick out the poisonous plants.

Having a slime girl around is a handy way to pick out the poisonous plants.