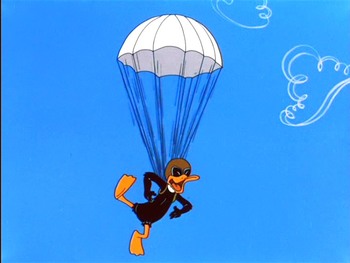 In Real Life, parachutes are big; rarely less than twelve to fifteen feet across once unfurled. But in animation (and comics especially), parachutes are usually much smaller — a four to six foot diameter for example — yet somehow, they still manage to work just as well (if not better) than their real life counterparts. This also applies to airship envelopes, and for the same reasons.

This is based on the Rule of Perception, as a realistically proportioned parachute would reduce the user to little more than a dot or a line hanging from it.

A type of Balloonacy, with Parasol Parachute as a distinct subtrope usually Played for Laughs. See also Improvised Parachute, which often fits this trope.