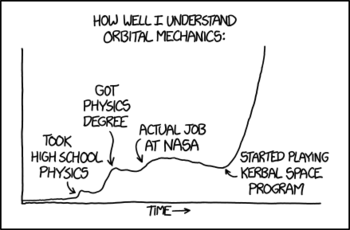 The show you're watching is not made for educational purposes, nor is it a total Aesop magnet. It most certainly isn't full of And Knowing Is Half the Battle sequences at the end of each episode. It may not even be a hundred percent accurate about what it's depicting, and that's entirely for Rule of Cool, Rule of Funny, or any of the other Rules. But it's still, oddly enough, an educational experience — you have a better understanding of the topic it depicts than you did before.

It's a trend that's increased in time over the Internet, as wikis and fansites are very adept at dissecting the Genius Bonuses that various works have to offer, and creators realise this and start to insert more and more references to things they are interested in and know a lot about. This creates a viable middle ground — it's not essential to enjoying the story, but it adds another dimension to it if you're willing to keep your mind open to it.

It stops short of From Entertainment to Education, which is the point at which actual educational institutions think you can learn from the show in an academic setting. See also I Read It for the Articles, which may point to this sort of thing happening but isn't necessarily true. Not to be confused with an Accidental Aesop, where the lesson learned comes from a misinterpretation, intentional or otherwise, of the original lesson, or with Space Whale Aesop, where the "lesson" learned quite literally comes out of nowhere with no relation to the circumstances of the story. See Shameful Source of Knowledge for a related In-Universe trope.