Literature / The Left Hand of Darkness 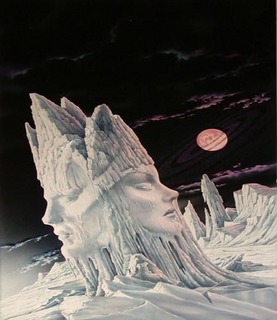 "Light is the left hand of darkness
and darkness is the right hand of light.
Two are one, life and death, lying
together like lovers in kemmer,
like hands joined together,
like the end and the way."
Advertisement:

A 1969 Science fiction novel from Ursula K. Le Guin and the most famous work of the Hainish Cycle. Darkness tells the story of Genly Ai of Earth, the Envoy of the Ekumen, to the planet Gethen. Gethen is far from the rest of the planets on which the ancient Hain settled much of humanity. Gethen, which has been nicknamed 'Winter' by the Terrans, is a cold, glacial planet, but its real peculiarity is in the people: Gethenians are Gender Benders, and it has a profound effect on their society.

Genly Ai's task is to persuade Gethenians to join the Ekumen, but they're unreceptive, while tensions between the nations of Orgoreyn and Karhide grow and the first war ever on Gethen is looming on the horizon...

radio drama adaptation of the novel.

Tropes appearing in The Left Hand of Darkness: