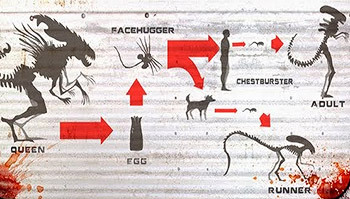 The Xenomorph life cyclenote Dog may be substituted with an ox if unavailable.
Wuffles: You are misinterpreting what you saw, Pieter!
Pieter: I saw the tentacles! I know what that means!
Wuffles: My reproductive organs are in my mouth! It doesn't work that way!
— Nobody Dies
Advertisement:

Okay, you've got your Humanoid Aliens. But no matter what you do, they don't seem alien-y enough. So you add some Bizarre Alien Biology. What's the easiest way to do this? Sex! Guaranteed to appeal to somebody, and if done right, it can look like something other than just being a pervert or possibly Fanservice. It should be added that no matter how deviant it seems to us, Good People Have Good Sex and this counts as good sex, even if it is interspecies.

Sometimes related to G-Rated Sex. May fall into Artistic License – Biology, if the reproductive method fails to generate enough offspring to maintain a population. Note for examples to not include anything related to cultural practices; we're limited to the biology of reproduction here. Put examples belonging to subtropes on their own pages, please.

Compare Bizarre Sexual Dimorphism. If this trope is averted even when it shouldn't be, we're dealing with a Male-to-Female Universal Adaptor.

open/close all folders
Anime and Manga
Comic Books
Advertisement:
Fan Works
Films — Live-Action
Literature
The ovum spilt him forth at length and he took the shape of a man and lived among men and protected himself against men. And his one purpose was to arrange to have men travel along a path that would end with a ship and within the ship a hole and within the hole, himself.
Live-Action TV
Oral Tradition
Podcasts
Radio
Tabletop Games
Video Games
Webcomics
Web Original
Western Animation
Real Life
Feedback

How Are Gems Made?

Gems are manufactured from non-living minerals using special machinery, with the new gems literally popping out of a hole in the ground.

How Are Gems Made?

Gems are manufactured from non-living minerals using special machinery, with the new gems literally popping out of a hole in the ground.